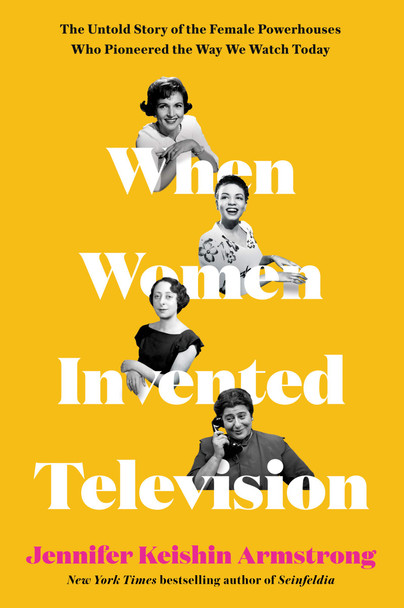 “Leaps at the throat of television history and takes down the patriarchy with its fervent, inspired prose. When Women Invented Television offers proof that what we watch is a reflection of who we are as a people.” —Nathalia Holt, New York Times bestselling author of Rise of the Rocket Girls

New York Times bestselling author of Seinfeldia Jennifer Keishin Armstrong tells the little-known story of four trailblazing women in the early days of television who laid the foundation of the industry we know today.

It was the Golden Age of Radio and powerful men were making millions in advertising dollars reaching thousands of listeners every day. When television arrived, few radio moguls were interested in the upstart industry and its tiny production budgets, and expensive television sets were out of reach for most families. But four women—each an independent visionary— saw an opportunity and carved their own paths, and in so doing invented the way we watch tv today.

Irna Phillips turned real-life tragedy into daytime serials featuring female dominated casts. Gertrude Berg turned her radio show into a Jewish family comedy that spawned a play, a musical, an advice column, a line of house dresses, and other products. Hazel Scott, already a renowned musician, was the first African American to host a national evening variety program. Betty White became a daytime talk show fan favorite and one of the first women to produce, write, and star in her own show.

Together, their stories chronicle a forgotten chapter in the history of television and popular culture.

But as the medium became more popular—and lucrative—in the wake of World War II, the House Un-American Activities Committee arose to threaten entertainers, blacklisting many as communist sympathizers. As politics, sexism, racism, anti-Semitism, and money collided, the women who invented television found themselves fighting from the margins, as men took control. But these women were true survivors who never gave up—and thus their legacies remain with us in our television-dominated era. It's time we reclaimed their forgotten histories and the work they did to pioneer the medium that now rules our lives.

This amazing and heartbreaking history, illustrated with photos, tells it all for the first time.

The book, When Women Invented Television: The Untold Story of the Female Powerhouses Who Pioneered the Way We Watch Today [Bulk, Wholesale, Quantity] ISBN# 9780062973306 in Hardcover by Jennifer Keishin Armstrong may be ordered in bulk quantities. Minimum starts at 25 copies. Availability based on publisher status and quantity being ordered.
View AllClose

The Boy Who Invented TV: The Story of Philo Farnsworth

MSRP:
Now:
As low as
Was:
An astonishing—and astonishingly entertaining—history of Hollywood’s transformation over the past five decades as seen through the agency at the heart of it all, from the #1 bestselling co-author of...

She Did It!: 21 Women Who Changed the Way We Think [Paperback]

MSRP:
Now:
As low as
Was: $21.99
Prepare to discover new heroes among these twenty-one women who challenged the status quo, championed others, and made their voices heard. From Jane Addams to Alice Waters, from groundbreaking...

The Boy Who Invented TV: The Story of Philo Farnsworth [Paperback]

MSRP:
Now:
As low as
Was:
An inspiring true story of a boy genius. Plowing a potato field in 1920, a 14-year-old farm boy from Idaho saw in the parallel rows of overturned earth a way to “make pictures fly through the air.”...

The League of Wives: The Untold Story of the Women Who Took on the U.S. Government to Bring Their Husbands Home [Paperback]

MSRP:
Now:
As low as
Was:
The true story of the fierce band of women who battled Washington―and Hanoi―to bring their husbands home from the jungles of Vietnam. On February 12, 1973, one hundred and sixteen men who, just six...

The Whiteness of Wealth: How the Tax System Impoverishes Black Americans--And How We Can Fix It

MSRP:
Now:
As low as
Was:
A groundbreaking exposé of racism in the American taxation system from a law professor and expert on tax policy “Important reading for those who want to understand how inequality is built into the...

MSRP:
Now:
As low as
Was:
A visual guide for the very youngest birders. Discover all about birds! The first pages describe birds' amazing variety and adaptations, with sequences that show exactly how they fly. Life cycle...

The Three Mothers: How the Mothers of Martin Luther King, Jr., Malcolm X, and James Baldwin Shaped a Nation

MSRP:
Now:
As low as
Was:
Much has been written about Berdis Baldwin's son James, about Alberta King's son Martin Luther, and Louise Little's son Malcolm. But virtually nothing has been said about the extraordinary women who...

The War on Cops: How the New Attack on Law and Order Makes Everyone Less Safe

MSRP:
Now:
As low as
Was:
Violent crime has been rising sharply in many American cities after two decades of decline. Homicides jumped nearly 17 percent in 2015 in the largest 50 cities, the biggest one-year increase since...

MSRP:
Now:
As low as
Was:
“Harvey offers surprising insights into the male mentality and gives women strategies for taming that unruly beast.” —Philadelphia Inquirer “Women should listen to Steve Harvey when it comes to what...

The Crocodile and the Dentist

MSRP:
Now:
As low as
Was:
Author-illustrator Taro Gomi has sold over one million books to date! Anyone who has ever dreaded a visit to the dentist's office will appreciate this quirky and comical, one-of-a-kind picture book...