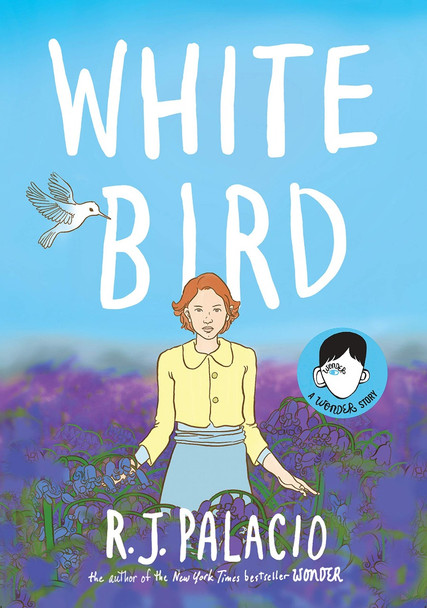 **A 2019 OWL AWARD SHORTLIST WINNER IN THE MIDDLE SCHOOL CATEGORY**

Inspired by her blockbuster phenomenon Wonder, R. J. Palacio makes her graphic novel debut with an unforgettable story of the power of kindness and unrelenting courage in a time of war.

In R. J. Palacio's bestselling collection of stories Auggie & Me, which expands on characters in Wonder, readers were introduced to Julian's grandmother, Grandmère. Here, Palacio makes her graphic novel debut with Grandmère's heartrending story: how she, a young Jewish girl, was hidden by a family in a Nazi-occupied French village during World War II; how the boy she and her classmates once shunned became her savior and best friend.

Sara's harrowing experience movingly demonstrates the power of kindness to change hearts, build bridges, and even save lives. As Grandmère tells Julian, "It always takes courage to be kind, but in those days, such kindness could cost you everything." With poignant symbolism and gorgeous artwork that brings Sara's story out of the past and cements it firmly in this moment in history, White Bird is sure to captivate anyone who was moved by the book Wonder or the blockbuster movie adaptation and its message.

The book, White Bird: A Wonder Story [Bulk, Wholesale, Quantity] ISBN# 9780525645535 in Paperback by R.J. Palacio may be ordered in bulk quantities. Minimum starts at 25 copies. Availability based on publisher status and quantity being ordered.

MSRP:
Now:
As low as
Was:
WONDER IS SOON TO BE A MAJOR MOTION PICTURE STARRING JULIA ROBERTS AND JACOB TREMBLAY! Over 5 million people have read the #1 New York Times bestseller Wonder—the book that inspired the Choose...

MSRP:
Now:
As low as
Was:
This fascinating picture book biography tells the childhood story of Buffalo Bird Woman—a Hidatsa Indian born around 1839. Through her true story, readers learn what it was like to be part of this...

The Story of Snow: The Science of Winter's Wonder

MSRP:
Now:
As low as
Was:
How do snow crystals form? What shapes can they take? Are no two snow crystals alike? These questions and more are answered inside this exploration of the science of snow, featuring photos of real...

MSRP:
Now:
As low as
Was:
In R. J. Palacio's bestselling collection of stories Auggie & Me, which expands on characters in Wonder, readers were introduced to Julian's grandmother, Grandmère. Here, Palacio makes her...

Inside Out and Back Again [Paperback]

MSRP:
Now:
As low as
Was:
Inside Out and Back Again is a New York Times bestseller, a Newbery Honor Book, and a winner of the National Book Award! Inspired by the author's childhood experience of fleeing Vietnam after the...

MSRP:
Now:
As low as
Was:
**A 2018 OWL AWARD LONGLIST WINNER IN THE CHILDREN'S LITERATURE CATEGORY**In captivating paintings full of movement and transformation, Tamaki follows a young girl through a year or a day as she...

The Most Powerful Woman in the Room Is You: Command an Audience and Sell Your Way to Success [Paperback]

MSRP:
Now:
As low as
Was:
**A 2019 OWL AWARD SHORTLIST WINNER IN THE WOMEN IN BUSINESS CATEGORY**In The Most Powerful Woman in the Room Is You, Lydia Fenet takes you on her twenty-year journey from intern to managing director...

The Worst Hard Time : The Untold Story of Those Who Survived the Great American Dust Bowl [Paperback]

MSRP:
Now:
As low as
Was:
The dust storms that terrorized the High Plains in the darkest years of the Depression were like nothing ever seen before or since. Timothy Egan's critically acclaimed account rescues this iconic...

MSRP:
Now:
As low as
Was:
The book, As I Lay Dying [ Bulk Wholesale Quantity ] ISBN 067973225X in by Faulkner, William may be ordered in bulk quantities . Bulk book availability based on publisher status and quantity being...

MSRP:
Now:
As low as
Was:
Lois Lowry, author of the classic title The Giver, crafted another masterpiece of fiction when she wrote Number the Stars. Like the Giver, this Newbery Medal winner is a standard read for school...

The Making of a Manager: What to Do When Everyone Looks to You

MSRP:
Now:
As low as
Was:
*Named by Forbes as one of the "Best Books on Leadership for 2019."* Leading a team for the first time is a daunting new endeavor. Facebook's Vice President of Product Design Julie Zhuo presents a...