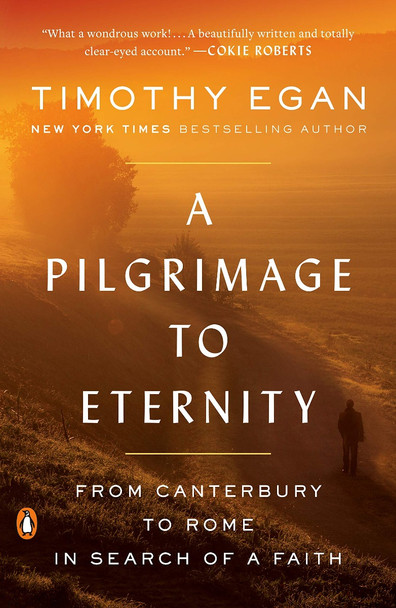 From "the world's greatest tour guide," a deeply-researched, captivating journey through the rich history of Christianity and the winding paths of the French and Italian countryside that will feed mind, body, and soul (New York Times).

"What a wondrous work! This beautifully written and totally clear-eyed account of his pilgrimage will have you wondering whether we should all embark on such a journey, either of the body, the soul or, as in Egan's case, both." --Cokie Roberts

"Egan draws us in, making us feel frozen in the snow-covered Alps, joyful in valleys of trees with low-hanging fruit, skeptical of the relics of embalmed saints and hopeful for the healing of his encrusted toes, so worn and weathered from their walk."--The Washington Post

Moved by his mother's death and his Irish Catholic family's complicated history with the church, Timothy Egan decided to follow in the footsteps of centuries of seekers to force a reckoning with his own beliefs. He embarked on a thousand-mile pilgrimage through the theological cradle of Christianity to explore the religion in the world that it created. Egan sets out along the Via Francigena, once the major medieval trail leading the devout to Rome, and travels overland via the alpine peaks and small mountain towns of France, Switzerland and Italy, accompanied by a quirky cast of fellow pilgrims and by some of the towering figures of the faith--Joan of Arc, Henry VIII, Martin Luther. The goal: walking to St. Peter's Square, in hopes of meeting the galvanizing pope who is struggling to hold together the church through the worst crisis in half a millennium.

A thrilling journey, a family story, and a revealing history, A Pilgrimage to Eternity looks for our future in its search for God.

The book, A Pilgrimage to Eternity: From Canterbury to Rome in Search of a Faith [Bulk, Wholesale, Quantity] ISBN# 9780735225251 in Paperback by Timothy Egan may be ordered in bulk quantities. Minimum starts at 25 copies. Availability based on publisher status and quantity being ordered.

MSRP:
Now:
As low as
Was:
The procession that crosses Chaucer's pages is as full of life and as richly textured as a medieval tapestry. The Knight, the Miller, the Friar, the Squire, the Prioress, the Wife of Bath, and others...

Ancient Rome: From Romulus to Justinian

MSRP:
Now:
As low as
Was:
A beautifully written, highly accessible, and comprehensive history of Rome from its founding in the eighth century BC through to Justinian in the sixth century CE. With commanding skill, Thomas R...

MSRP:
Now:
As low as
Was:
Nevill Coghill’s masterly and vivid modern English verse translation with all the vigor and poetry of Chaucer’s fourteenth-century Middle English In The Canterbury Tales Chaucer created one of the...

Saving God from Religion: A Minister's Search for Faith in a Skeptical Age

MSRP:
Now:
As low as
Was:
A revelatory manifesto on how we can reclaim faith from abstract doctrines and rigid morals to find God in the joys and ambiguities of everyday life, from the acclaimed author of Saving Jesus from...

Grieving the Loss of a Loved One: A Devotional of Comfort as You Mourn

MSRP:
Now:
As low as
Was:
Losing a loved one is painful and overwhelming. As a mother who has suffered with loss on many levels, Kathe Wunnenberg knows from firsthand experience that there are no easy answers for those who...

It's Ok That You're Not Ok: Meeting Grief and Loss in a Culture That Doesn't Understand

MSRP:
Now:
As low as
Was:
When a painful loss or life-shattering event upends your world, here is the first thing to know: there is nothing wrong with grief. Grief is simply love in its most wild and painful form, says Megan...

MSRP:
Now:
As low as
Was:
When he realizes that his grandfather's stories of an enchanted circus are true, Micah Tuttle sets out to find the mysterious Circus Mirandus--and to use its magic to save his grandfather's life.....

Our Revolution: A Future to Believe In [Paperback]

MSRP:
Now:
As low as
Was:
The New York Times Best Seller! When Bernie Sanders began his race for the presidency, it was considered by the political establishment and the media to be a “fringe” campaign, something not to be...

MSRP:
Now:
As low as
Was:
Secrets to mastering the details that will get you noticed and get you ahead at work, from etiquette expert and author ofBUSINESS CLASS , Jacqueline Whitmore. In the past, the business world favored...

MSRP:
Now:
As low as
Was:
Using simple language that beginning readers can understand, this lively, inspiring, and believable biography looks at the childhood of inventor and magnate Henry FordThe book, Henry Ford : Young Man...

MSRP:
Now:
As low as
Was:
Cosmos is one of the bestselling science books of all time. In clear-eyed prose, Sagan reveals a jewel-like blue world inhabited by a life form that is just beginning to discover its own identity and...