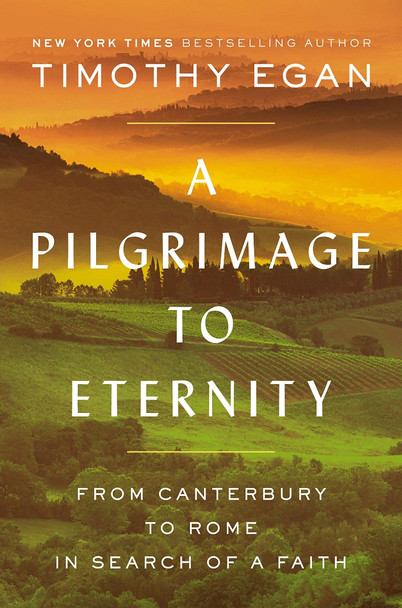 Tracing an ancient pilgrimage route from Canterbury to Rome, the bestselling and "virtuosic" (The Wall Street Journal) writer explores the past and future of Christianity

At a time when Britain, America, and much of Europe have never been so secular--and when his mother's death and his Irish Catholic family's complicated history with the church prompted a reckoning with his own beliefs -- Timothy Egan decided to follow in the footsteps of centuries of seekers. He embarked on a thousand-mile pilgrimage through the theological cradle of Christianity, to explore one of the biggest stories of our time: the collapse of religion in the world that it created. Egan sets out along the Via Francigena, once the major medieval trail leading the devout to Rome, and makes his way overland via the alpine peaks and small mountain towns of France, Switzerland and Italy. The goal: walking to St. Peter's Square, in hopes of meeting the galvanizing pope who is struggling to hold together the church through the worst crisis in half a millennium.

Making his way through a landscape laced with some of the most important shrines to the faith, Egan finds a modern Canterbury Tale in the chapel where Queen Bertha introduced Christianity to pagan Britain; parses the supernatural in a French town built on miracles; and journeys to the oldest abbey in the Western world, founded in 515 and home to continuous prayer over the 1,500 years that have followed. He is accompanied by a quirky cast of fellow pilgrims and by some of the towering figures of the faith--Joan of Arc, Henry VIII, Martin Luther.

A thrilling journey, a family story, and a revealing history, A Pilgrimage to Eternity looks for our future in its search for God.

The book, A Pilgrimage to Eternity: From Canterbury to Rome in Search of a Faith [Bulk, Wholesale, Quantity] ISBN# 9780735225237 in Hardcover by Timothy Egan may be ordered in bulk quantities. Minimum starts at 25 copies. Availability based on publisher status and quantity being ordered.

MSRP:
Now:
As low as
Was:
The procession that crosses Chaucer's pages is as full of life and as richly textured as a medieval tapestry. The Knight, the Miller, the Friar, the Squire, the Prioress, the Wife of Bath, and others...

Ancient Rome: From Romulus to Justinian

MSRP:
Now:
As low as
Was:
A beautifully written, highly accessible, and comprehensive history of Rome from its founding in the eighth century BC through to Justinian in the sixth century CE. With commanding skill, Thomas R...

MSRP:
Now:
As low as
Was:
Nevill Coghill’s masterly and vivid modern English verse translation with all the vigor and poetry of Chaucer’s fourteenth-century Middle English In The Canterbury Tales Chaucer created one of the...

Saving God from Religion: A Minister's Search for Faith in a Skeptical Age

MSRP:
Now:
As low as
Was:
A revelatory manifesto on how we can reclaim faith from abstract doctrines and rigid morals to find God in the joys and ambiguities of everyday life, from the acclaimed author of Saving Jesus from...

Sybil Ludington: Revolutionary War Rider ( Based on a True Story )

MSRP:
Now:
As low as
Was:
What would you do if your country was counting on you? If you had a message that only you could deliver? That's the story of sixteen-year-old Sybil Ludington's famous midnight ride. In 1777, living...

A Colorful Way of Living: How to Be More, Create More, Do More the Vera Bradley Way [Hardcover]

MSRP:
Now:
As low as
Was:
From the co-founder of the Vera Bradley empire, a practical and inspiring book that shows women how to awaken their full potential, at any age. "This place could use some color!" That's what Barbara...

The Oresteia: Agamemnon; the Libation Bearers; the Eumenides [Paperback]

MSRP:
Now:
As low as
Was:
Introductory essay, notes and glossary by W.B.StanfordThe book, The Oresteia : Agamemnon; the Libation Bearers; the Eumenides ISBN 9780140443332 in Paperback by ;Aeschylus may be ordered in bulk...

Sweep: The Story of a Girl and Her Monster (Paperback) [Paperback]

MSRP:
Now:
As low as
Was:
A 2019 Sydney Taylor Book Award Winner! It's been five years since the Sweep disappeared. Orphaned and alone, Nan Sparrow had no other choice but to work for a ruthless chimney sweep named Wilkie...

Breaking Rockefeller: The Incredible Story of the Ambitious Rivals Who Toppled an Oil Empire

MSRP:
Now:
As low as
Was:
Raja Rajamannar, Chief Marketing Officer of Mastercard, shares breakthrough, frontier strategies to navigate the challenges marketers face to thrive in a modern business world that is changing with...

MSRP:
Now:
As low as
Was:
What are the consequences if the people given control over our government have no idea how it works? "The election happened," remembers Elizabeth Sherwood-Randall, then deputy secretary of the...