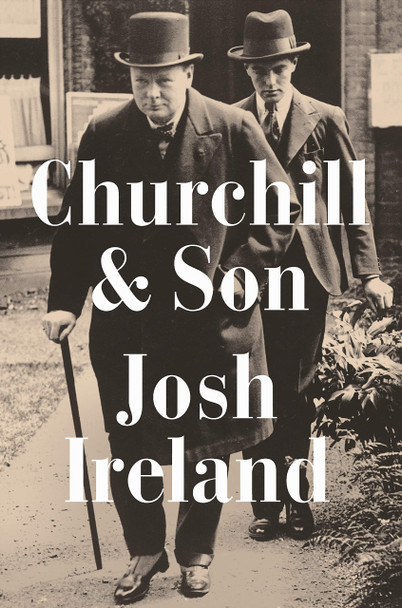 MSRP:
Now: List Price $34.00
Was:
— You save
Hardcover
This product qualifies for FREE US Ground Shipping on orders over $100.

The intimate, untold story of Winston Churchill's enduring yet volatile bond with his only son, Randolph

We think we know Winston Churchill: the bulldog grimace, the ever-present cigar, the wit and wisdom that led Great Britain through the Second World War. Yet away from the House of Commons and the Cabinet War Rooms, Churchill was a loving family man who doted on his children, none more so than Randolph, his only boy and Winston's anointed heir to the Churchill legacy.

Randolph may have been born in his father's shadow, but his father, who had been neglected by his own parents, was determined to see him go far. For decades, throughout Winston's climb to greatness, father and son were inseparable--dining with Britain's elite, gossiping and swilling Champagne at high society parties, holidaying on the French Riviera, touring Prohibition-era America. Captivated by Winston's power, bravery, and charisma, Randolph worshipped his father, and Winston obsessed over his son's future. But their love was complex and combustible, complicated by money, class, and privilege, shaded with ambition, outsize expectations, resentments, and failures.

Deeply researched and magnificently written, Churchill & Son is a revealing and surprising portrait of one of history's most celebrated figures.

The book, Churchill & Son [Bulk, Wholesale, Quantity] ISBN# 9781524744458 in Hardcover by Josh Ireland may be ordered in bulk quantities. Minimum starts at 25 copies. Availability based on publisher status and quantity being ordered.
View AllClose

MSRP:
Now:
As low as
Was:
The story of a young black man caught in a downward spiral after he kills a young white woman in a brief moment of panicThe book, Native Son ISBN 9780060533489 in Paperback by Wright, Richard may be...

Churchill on Leadership: Executive Success in the Face of Adversity

MSRP:
Now:
As low as
Was:
Success often depends on the strength of a single quality: leadership. Winston Churchill is universally recognized as one of the 20th century's great political leaders and his words ring just as true...

Not My Father's Son: A Memoir

MSRP:
Now:
As low as
Was:
NEW YORK TIMES BESTSELLER “Equal parts memoir, whodunnit, and manual for living . . . a beautifully written, honest look at the forces of blood and bone that make us who we are, and how we make...

MSRP:
Now:
As low as
Was:
Right from the start, Bigger Thomas had been headed for jail. It could have been for assault or petty larceny; by chance, it was for murder and rape. Native Son tells the story of this young black...

Advice for Future Corpses (and Those Who Love Them): A Practical Perspective on Death and Dying

MSRP:
Now:
As low as
Was:
A straightforward, wise, and humorous narrative field guide for both the dying and those who love them by an author who brings a unique set of qualifications to this delicate subject—she's a Pushcart...

MSRP:
Now:
As low as
Was:
The prequel to The Lord of the Rings—The Hobbit—is now a major motion picture directed by Peter Jackson THE GREATEST FANTASY EPIC OF OUR TIME The dark, fearsome Ringwraiths are searching for a...

MSRP:
Now:
As low as
Was:
From Ada Lovelace (computing) to Marie Curie (Physics and Chemistry), these exceptional women enabled the world to advance in all fields of science including space exploration (Mae Jemison),...

It Doesn't Have to Be Awkward: Dealing with Relationships, Consent, and Other Hard-To-Talk-About Stuff

MSRP:
Now:
As low as
Was:
From celebrity M.D. Dr. Drew Pinsky and his daughter Paulina Pinsky comes an entertaining and comprehensive guide to sex, relationships, and consent in today’s #Metoo era. Perfect for teens, parents,...

MSRP:
Now:
As low as
Was:
Make your next marketing campaign a success when you offer this Ivory Singer Journal! It measures 5 1/4" x 8 3/8" and comes with 64 ivory sheets of FSC® certified paper with gray lines. Add an...

MSRP:
Now:
As low as
Was:
This customizable journal is the perfect on the go product, featuring 240 lined ivory pages with a convenient size. There are two pen loops, one on the front and one on the back, allowing you...