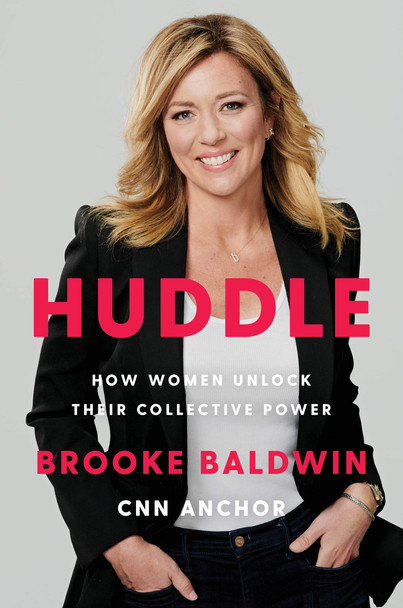 CNN news anchor Brooke Baldwin explores the phenomenon of what she calls the “huddle,” when women get together—in politics, Hollywood, activism, the arts, sports, and everyday friendships—to provide each other support, empowerment, inspiration, and the strength to solve problems or enact meaningful change. Whether they are facing adversity (like workplace inequity or a global pandemic) or organizing to make the world a better place, women are a highly potent resource for one another.

Through a mix of journalism and personal narrative, Baldwin takes readers beyond the big headline-making huddles from the last few years (such as the Women’s March, #MeToo, Times Up, and the pink wave in the 2018 midterm elections) and embeds herself in groups of women of all ages, races, religions and socio-economic backgrounds who are banding together in America. HUDDLE explores several stories including:

• The benefits of all-girls learning environments, such as Karlie Kloss’s Kode with Klossy and Reese Witherspoon’s Filmmaker Lab for Girls in which young women are given the freedom to make mistakes, and find their confidence.
• The tactics employed by huddles of women who work in male-dominated industries including a group of US veterans/Democratic Congresswomen, a huddle of African-American judges in Harris County, Texas, and an all-female writers room in Hollywood.
• The wisdom of huddling from trusted pioneers such as Gloria Steinem, Billie Jean King, and Madeleine Albright as well as contemporary trailblazers like Stacey Abrams and Ava DuVernay.
• How professionals such as Chef Dominique Crenn and sports agent Lindsay Colas use their success to amplify other women in their fields.
• The ways huddles of women are dedicated to making seismic change, including a look at Indigenous women saving the planet, the women who founded Black Lives Matter, the mothers fighting for sensible gun laws, America’s favorite female athletes (Megan Rapinoe, Hilary Knight, and Sue Bird to name a few) agitating for equal pay, and female teachers rallying to improve their working conditions.
• The bond between women who practice self-care and trauma healing together, including the women who courageously survived sexual abuse, and the women who heal together in The Class and GirlTrek.
• The ways women are becoming more intentional about the life-saving power of friendship, including the bonds between military wives, new moms, and nurses getting through the time of Covid.

Throughout her examination of this fascinating huddle phenomenon, Baldwin learns about the periods of huddle ‘droughts” in America, as well as the ways that Black women have been huddling for centuries. She also uncovers how huddling can be the “secret sauce” that makes many things possible for women: success in the workplace, effective grassroots change, confidence in girlhood, and a better physical and mental health profile in adulthood. Along the way, Baldwin takes readers through her own personal journey of growing up in the South and climbing the ladder of a male-dominated industry. Like so many women in her field, she encountered many sharp elbows on her career path, but became an early believer in adding more seats to the table and huddling with other women for strength and solidarity. In the process of writing HUDDLE, Baldwin learns that this seemingly new phenomenon is actually something women have been doing for generations—a quiet, collective power she learns to unlock in her transformation from journalist to champion for women.

The book, Huddle: How Women Unlock Their Collective Power [Bulk, Wholesale, Quantity] ISBN# 9780063017443 in Hardcover by Brooke Baldwin may be ordered in bulk quantities. Minimum starts at 25 copies. Availability based on publisher status and quantity being ordered.
View AllClose

Power Moves: How Women Can Pivot, Reboot, and Build a Career of Purpose

MSRP:
Now: $28.99
Was:
From the founder of the influential website Career Contessa, an invaluable career resource for women feeling stuck or unfulfilled that combines actionable advice, learning tools to make impactful...

How to Say It for Women: Communicating with Confidence and Power Using the Language of Success

MSRP:
Now: $20.00
Was:
An expert on professional communications teaches women how to transform themselves by shedding weak phrases, gestures and words, in order to command respect, motivate, establish authority, and make a...

Stretch: Unlock the Power of Less -And Achieve More Than You Ever Imagined

MSRP:
Now: $28.99
Was:
A Rice University social scientist teaches you to rethink what you need to succeed, and do more with what you already have, in this counterintuitive, evidence-based guide to changing the way you work...

The Power of Presence: Unlock Your Potential to Influence and Engage Others

MSRP:
Now: $18.95
Was:
You don't have to be born with it . . . When some people speak, everyone listens. When they need commitment to projects, others jump on board. These are the lucky few with "presence"--that subtle...

The Most Powerful Woman in the Room Is You: Command an Audience and Sell Your Way to Success [Paperback]

MSRP:
Now: $17.00
Was:
In The Most Powerful Woman in the Room Is You, Lydia Fenet takes you on her twenty-year journey from intern to managing director and global head of strategic partnerships at Christie’s Auction House...

Henry and Mudge and the Sneaky Crackers

MSRP:
Now: $4.99
Was:
With his new spy kit and his faithful sidekick Mudge, Henry is ready to look for clues, steal secrets, and flirt with danger. One of the first things Henry and Mudge find is a coded message -- could...

Genius Makers: The Mavericks Who Brought AI to Google, Facebook, and the World

MSRP:
Now: $28.00
Was:
THE UNTOLD TECH STORY OF OUR TIME What does it mean to be smart? To be human? What do we really want from life and the intelligence we have, or might create? With deep and exclusive...

The Flip Side of Free: Understanding the Economics of the Internet

MSRP:
Now: $29.95
Was:
Why "free" comes at a price: the costs of free internet services in terms of privacy, cybersecurity, and the growing market power of technology giants. The upside of the internet is free Wi-Fi at...

Future Tech: How to Capture Value from Disruptive Industry Trends