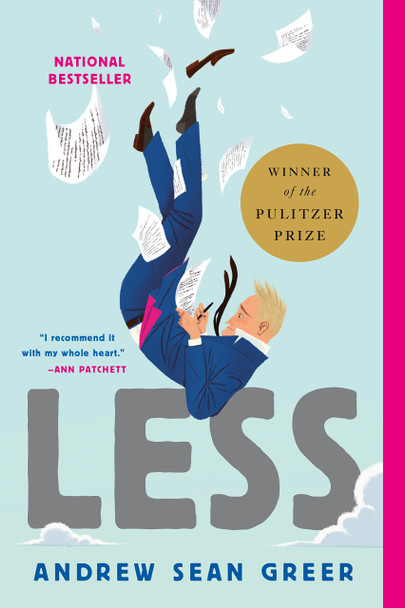 "I could not love LESS more."--Ron Charles, Washington Post

Who says you can't run away from your problems? You are a failed novelist about to turn fifty. A wedding invitation arrives in the mail: your boyfriend of the past nine years is engaged to someone else. You can't say yes--it would be too awkward--and you can't say no--it would look like defeat. On your desk are a series of invitations to half-baked literary events around the world.

QUESTION: How do you arrange to skip town?

ANSWER: You accept them all.

What would possibly go wrong? Arthur Less will almost fall in love in Paris, almost fall to his death in Berlin, barely escape to a Moroccan ski chalet from a Saharan sandstorm, accidentally book himself as the (only) writer-in-residence at a Christian Retreat Center in Southern India, and encounter, on a desert island in the Arabian Sea, the last person on Earth he wants to face. Somewhere in there: he will turn fifty. Through it all, there is his first love. And there is his last.

Because, despite all these mishaps, missteps, misunderstandings and mistakes, Less is, above all, a love story.

A scintillating satire of the American abroad, a rumination on time and the human heart, a bittersweet romance of chances lost, by an author The New York Times has hailed as "inspired, lyrical," "elegiac," "ingenious," as well as "too sappy by half," Less shows a writer at the peak of his talents raising the curtain on our shared human comedy.

The book, Less [Bulk, Wholesale, Quantity] ISBN# 9780316316132 in Paperback by Andrew Sean Greer may be ordered in bulk quantities. Minimum starts at 25 copies. Availability based on publisher status and quantity being ordered.
View AllClose

MSRP:
Now:
As low as
Was:
Is your age more than 5? Is it less than 10? Eddie's got to guess. And he doesn't want to be wrong! Eddie has a booth at the school fair, guessing people's ages. He hasn't guessed wrong yet, but if...

MSRP:
Now:
As low as
Was:
Perry the Penguin needs 9 clams to buy an ice scooter -- but he's not very good at saving. As Perry earns, spends, finds, loses, and borrows clams, a simple line graph demonstrates the concept of...

Subtract: The Untapped Science of Less

MSRP:
Now:
As low as
Was:
Blending evidence across science and design, Subtract: The Untapped Science of Less offers a revolution in problem-solving: proving why we overlook subtraction, and how we can access its true...

MSRP:
Now:
As low as
Was:
In the follow-up to the “bedazzling, bewitching, and be-wonderful” (New York Times​) best-selling and Pulitzer Prize-winning Less: A Novel, the awkward and lovable Arthur Less returns in an...

MSRP:
Now:
As low as
Was:
In her first novel since winning the Newbery Medal, New York Times bestselling author Katherine Applegate delivers an unforgettable and magical story about family, friendship, and resilience...

Designed to Last: Our Journey of Building an Intentional Home, Growing in Faith, and Finding Joy in the In-Between

MSRP:
Now:
As low as
Was:
“Ashley and Dino bring light and hope for relationships in this beautiful book. Explore Designed to Last with open eyes and an open heart, and discover how to find joy in the in-between.” —Liz Marie...

How to Raise a Reader

MSRP:
Now:
As low as
Was:
**A 2019 OWL AWARD LONGLIST WINNER IN THE GIFT & SPECIAL INTEREST CATEGORY**An indispensable guide to welcoming children—from babies to teens—to a lifelong love of reading, written by...

The Meaning of Marriage: A Couple's Devotional: A Year of Daily Devotions

MSRP:
Now:
As low as
Was:
From New York Times bestselling authors Timothy Keller and Kathy Keller comes a gorgeously packaged daily devotional that takes us on year-long journey into discovering the meaning of marriage ...

Play Nice But Win: A CEO's Journey from Founder to Leader

MSRP:
Now:
As low as
Was:
From Michael Dell, renowned founder and chief executive of one of America’s largest technology companies, the inside story of the battles that defined him as a leader In 1984, soon-to-be college...

He Leadeth Me: An Extraordinary Testament of Faith

MSRP:
Now:
As low as
Was:
A deeply personal story of one man’s spiritual odyssey and the unflagging faith which enabled him to survive the ordeal that wrenched his body and spirit to near collapse. Captured by a Russian...

MSRP:
Now:
As low as
Was:
An all-new storybook featuring Peppa--a lovable, slightly bossy little piggy! Includes stickers! It is bedtime for Peppa and George, but the little piggies are not sleepy! They must take their bath,...

MSRP:
Now:
As low as
Was:
From the host of the popular WNYC podcast Death, Sex, & Money, Let’s Talk About Hard Things is an invitation to discuss the tough topics that all of us encounter. “You will laugh, cry, nod in...

Healing Our Future: Leadership for a Changing Health System

MSRP:
Now:
As low as
Was:
This practical and evidence-based guide offers the seven key domains of effective healthcare leadership and explains what it will take to develop leaders for an evolving healthcare system. Andrew...