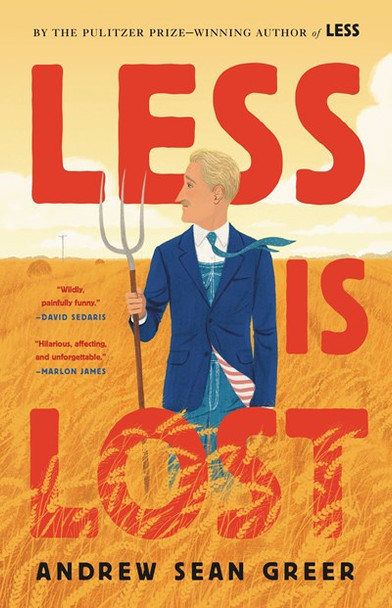 In the follow-up to the “bedazzling, bewitching, and be-wonderful” (New York Times​) best-selling and Pulitzer Prize-winning Less: A Novel, the awkward and lovable Arthur Less returns in an unforgettable road trip across America.

“Go get lost somewhere, it always does you good.”

For Arthur Less, life is going surprisingly well: he is a moderately accomplished novelist in a steady relationship with his partner, Freddy Pelu. But nothing lasts: the death of an old lover and a sudden financial crisis has Less running away from his problems yet again as he accepts a series of literary gigs that send him on a zigzagging adventure across the US.

Less roves across the “Mild Mild West,” through the South and to his mid-Atlantic birthplace, with an ever-changing posse of writerly characters and his trusty duo – a human-like black pug, Dolly, and a rusty camper van nicknamed Rosina. He grows a handlebar mustache, ditches his signature gray suit, and disguises himself in the bolero-and-cowboy-hat costume of a true “Unitedstatesian”... with varying levels of success, as he continues to be mistaken for either a Dutchman, the wrong writer, or, worst of all, a “bad gay.”

We cannot, however, escape ourselves—even across deserts, bayous, and coastlines. From his estranged father and strained relationship with Freddy, to the reckoning he experiences in confronting his privilege, Arthur Less must eventually face his personal demons. With all of the irrepressible wit and musicality that made Less a bestselling, Pulitzer Prize-winning, must-read breakout book, Less Is Lost is a profound and joyous novel about the enigma of life in America, the riddle of love, and the stories we tell along the way.

The book, Less Is Lost [Bulk, Wholesale, Quantity] ISBN# 9780316498906 in Hardcover by Andrew Sean Greer may be ordered in bulk quantities. Minimum starts at 25 copies. Availability based on publisher status and quantity being ordered.
View AllClose

MSRP:
Now:
As low as
Was:
On his way to school, a small boy befriends a very large bear who is lostThe book, Lost! ISBN 9780316563369 in Paperback by McPhail, David M. may be ordered in bulk quantities (minimums typically...

MSRP:
Now:
As low as
Was:
Perry the Penguin needs 9 clams to buy an ice scooter -- but he's not very good at saving. As Perry earns, spends, finds, loses, and borrows clams, a simple line graph demonstrates the concept of...

Subtract: The Untapped Science of Less

MSRP:
Now:
As low as
Was:
Blending evidence across science and design, Subtract: The Untapped Science of Less offers a revolution in problem-solving: proving why we overlook subtraction, and how we can access its true...

MSRP:
Now:
As low as
Was:
A struggling novelist travels the world to avoid an awkward wedding in this hilarious Pulitzer Prize-winning novel full of "arresting lyricism and beauty" (New York Times Book Review). WINNER OF...

Impact Players: How to Take the Lead, Play Bigger, and Multiply Your Impact

MSRP:
Now:
As low as
Was:
Why do some people break through and make an impact while others get stuck going through the motions? In every organization there are Impact Players—those indispensable colleagues who can be...

MSRP:
Now:
As low as
Was:
Bursting with inspiration and affirmation, Kheris Rogers’ debut picture book encourages children everywhere to love the skin they are in. When her confidence is shaken by peers who say they are...

MSRP:
Now:
As low as
Was:
Over a hill, at the end of a road, by a glittering stream that twists and turns stands a farmhouse. Step inside the dollhouse-like interior of Farmhouse and relish in the daily life of the family...

MSRP:
Now:
As low as
Was:
He wanted to create something that would change the world. Instead, he created her. By the journalist whose reporting on Anna Delvey inspired Netflix’s Inventing Anna, Bad Influence is the all-new...

MSRP:
Now:
As low as
Was:
Catherine Doyle’s stunning middle grade debut is an evocative tale of bravery and magic, perfect for fans of Beyond the Bright Sea. Fionn’s mother has long told him stories of Arranmore Island, a...

MSRP:
Now:
As low as
Was:
Shy and softhearted Charlie Spring sits next to rugby player Nick Nelson in class one morning. A warm and intimate friendship follows, and that soon develops into something more for Charlie, who...

MSRP:
Now:
As low as
Was:
Object Lessons is a series of short, beautifully designed books about the hidden lives of ordinary things. To hyphenate or not to hyphenate has been a central point of controversy since before the...

MSRP:
Now:
As low as
Was:
Book nerds rule! And what better gift than a book that celebrates bookishness? You know you’re a Book Nerd when… —You have a minimum of 5 books on your night table. —You never once thought...