My Utmost for His Highest: Classic Language Paperback 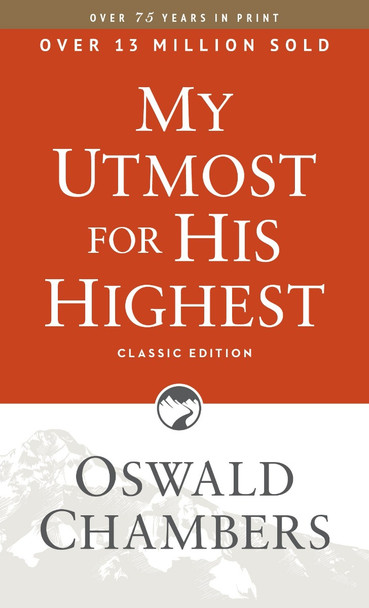 My Utmost for His Highest: Classic Language Paperback

The Best-Selling and Most Beloved Devotional Book of All Time! You’ll find 365 thought-provoking meditations in this classic-language paperback edition of “the golden book of Oswald Chambers.” My Utmost for His Highest will encourage and move you to think more deeply about your relationship with the Lord. My Utmost for His Highest has sold over 13 million copies worldwide and is considered one of the most popular religious books ever written. These captivating words of wisdom from Oswald Chambers have challenged and inspired readers for more than 80 years. Oswald Chambers was a teacher and preacher whose messages cut to the heart of the gospel. His wife, Biddy, transcribed his lectures and sermons and compiled them into books, the most popular being My Utmost for His Highest. The title is taken from a thought in one of his sermons: “Shut out every consideration and keep yourself before God for this one thing only—My Utmost for His Highest.” Chambers was a man completely devoted to Christ, and his life and writings clearly portray that. This daily devotional has inspired countless people to drink deeply from the biblical truths that Chambers so passionately championed.

The book, My Utmost for His Highest: Classic Language Paperback [Bulk, Wholesale, Quantity] ISBN# 9781627078771 in Paperback by Oswald Chambers may be ordered in bulk quantities. Minimum starts at 25 copies. Availability based on publisher status and quantity being ordered.
View AllClose

All My Sons (Penguin Classics) [Paperback]

MSRP:
Now:
As low as
Was:
Joe Keller and Herbert Deever, partners in a machine shop during the war, turned out defective airplane parts, causing the deaths of many men. Deever was sent to prison while Keller escaped...

MSRP:
Now:
As low as
Was:
This beginner's guide to fingerspelling and sign language contains the sign for each letter of the alphabet along with signs for words that begin with each letter. The book, My First Book of Sign...

MSRP:
Now:
As low as
Was:
"The best thing I’ve done is My Antonia," recalled Willa Cather. "I feel I’ve made a contribution to American letters with that book." Ántonia Shimerda returns to Black Hawk, Nebraska, to make a...

In the Language of My Captor

MSRP:
Now:
As low as
Was:
Acclaimed poet Shane McCrae’s latest collection is a book about freedom told through stories of captivity. Historical persona poems and a prose memoir at the center of the book address the illusory...

Highest Duty: My Search for What Really Matters

MSRP:
Now:
As low as
Was:
On January 15, 2009, the world witnessed a remarkable emergency landing when Captain "Sully" Sullenberger skillfully glided US Airways Flight 1549 onto the Hudson River, saving the lives of all 155...

MSRP:
Now:
As low as
Was:
The book, Rabbits, Rabbits & More Rabbits! [ Bulk Wholesale Quantity ] ISBN 823416607 in Paperback by Gibbons, Gail may be ordered in bulk quantities . Bulk book availability based on publisher...

MSRP:
Now:
As low as
Was:
For readers who love great short-short stories, this bountiful anthology is the best of Latin American and U.S. Latino writers. Following on the success of the Flash Fiction and Sudden Fiction...

MSRP:
Now:
As low as
Was:
Fall under the spell of this fantasy-adventure story about a Lebanese-American girl who finds the courage to save her grandmother. Perfect for fans of The Girl Who Drank the Moon. Sitti, Sami's...

Mine!: How the Hidden Rules of Ownership Control Our Lives

MSRP:
Now:
As low as
Was:
A hidden set of rules governs who owns what--explaining everything from whether you can recline your airplane seat to why HBO lets you borrow a password illegally--and in this lively and entertaining...

MSRP:
Now:
As low as
Was:
From the visionary bestselling author of The Second World and How to Run the World comes a bracing and authoritative guide to a future shaped less by national borders than by global supply chains, a...

No Dream Is Too High: Life Lessons from a Man Who Walked on the Moon [Hardcover]

MSRP:
Now:
As low as
Was:
Beloved American hero Buzz Aldrin reflects on the wisdom, guiding principles, and irreverent anecdotes he's gathered through his event-filled lifeâboth in outer space and on earthâin this...