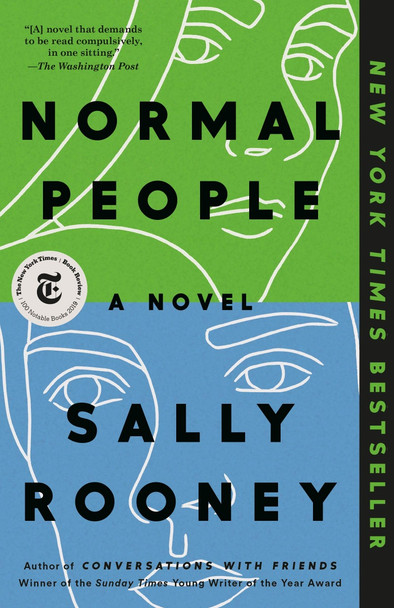 NOW A HULU ORIGINAL SERIES • NEW YORK TIMES BESTSELLER • “A stunning novel about the transformative power of relationships” (People) from the author of Conversations with Friends, “a master of the literary page-turner” (J. Courtney Sullivan).

ONE OF THE TEN BEST NOVELS OF THE DECADE—Entertainment Weekly

Connell and Marianne grew up in the same small town, but the similarities end there. At school, Connell is popular and well liked, while Marianne is a loner. But when the two strike up a conversation—awkward but electrifying—something life changing begins.

A year later, they’re both studying at Trinity College in Dublin. Marianne has found her feet in a new social world while Connell hangs at the sidelines, shy and uncertain. Throughout their years at university, Marianne and Connell circle one another, straying toward other people and possibilities but always magnetically, irresistibly drawn back together. And as she veers into self-destruction and he begins to search for meaning elsewhere, each must confront how far they are willing to go to save the other.

Normal People is the story of mutual fascination, friendship and love. It takes us from that first conversation to the years beyond, in the company of two people who try to stay apart but find that they can’t.

The book, Normal People [Bulk, Wholesale, Quantity] ISBN# 9781984822185 in Paperback by Sally Rooney may be ordered in bulk quantities. Minimum starts at 25 copies. Availability based on publisher status and quantity being ordered.
View AllClose

MSRP:
Now: $10.95
Was:
A searing drama about public and private indifference to the AIDS plague and one man's lonely fight to awaken the world to the crisis. Produced to acclaim in New York, London and Los Angeles, The...

MSRP:
Now: $13.99
Was:
When Murph Cooper begins his new school several weeks into the beginning of semester, he can't help but feel a bit out of his depth. And it's not because he's worried about where to sit, making...

MSRP:
Now: $16.99
Was:
Addie is waiting for normal. But Addie's mom has an all-or-nothing approach to life: a food fiesta or an empty pantry, jubilation or gloom, her way or no way. All or nothing never adds up to normal...

MSRP:
Now: $16.99
Was:
From entrepreneur Andrew Yang, the founder of Venture for America, an eye-opening look at how new technologies are erasing millions of jobs before our eyes-and a rallying cry for the urgent steps...

MSRP:
Now: $14.95
Was:
What is "normal?" That's the question an eager young scientist, narrating her very first book, hopes to answer. Unfortunately, her exceedingly "normal" subject—an orangutan named Norman—turns out to...

MSRP:
Now: $7.99
Was:
The complete edition of the bestselling children’s favorite, Chicka Chicka Boom Boom, is now available as a Classic Board Book! A told B and B told C, “I’ll meet you at the top of the coconut...

MSRP:
Now: $28.00
Was:
**2020 OWL AWARD WOMEN IN BUSINESS CATEGORY WINNER**Full of empowering wisdom from one of Silicon Valley's first female African American CEOs, this inspiring leadership book for readers of Dare to...

The Business of the 21st Century

MSRP:
Now: $17.95
Was:
In The Business of the 21st Century, Robert Kiyosaki explains the revolutionary business of network marketing in the context of what makes any business a success in any economic situation. This book...

The Guaranteed Customer Experience: How to Win Customers by Keeping Your Promises

MSRP:
Now: $14.95
Was:
What if you could guarantee your customers an amazing experience-and then deliver on that promise every time? The Guaranteed Customer Experience turns the concept of a guarantee on its head. An...

The Women's History of the Modern World: How Radicals, Rebels, and Everywomen Revolutionized the Last 200 Years

MSRP:
Now: $16.99
Was:
The internationally bestselling author of Who Cooked the Last Supper? presents a wickedly witty and very current history of the extraordinary female rebels, reactionaries, and trailblazers who left...

MSRP:
Now: $28.00
Was:
A bold, hopeful, and thought-provoking account by “one of the world’s leading thinkers” (The Observer) of how we built a lonely world, how the pandemic accelerated the problem, and what we must do to...

Make Your Move: The New Science of Dating and Why Women Are in Charge

MSRP:
Now: $16.95
Was:
Modern romance is broken. It's time to flip the script. Apps have transformed dating from a mysterious adventure into a daily chore. Young, single, college-educated women are sick and tired of...