On the House: A Washington Memoir 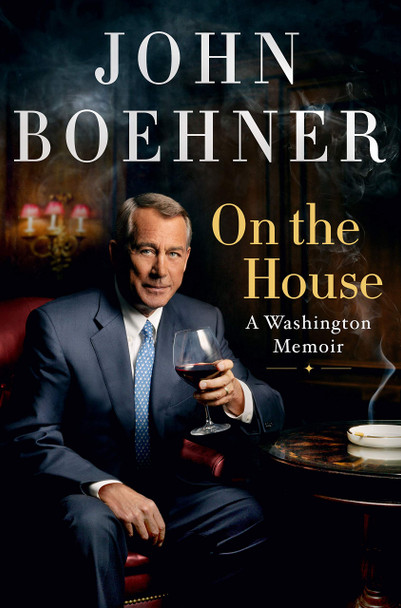 On the House: A Washington Memoir

John Boehner is the last of a breed. At a time when the arbiters of American culture were obsessing over organic kale, cold-pressed juice, and SoulCycle, the man who stood second in line to the presidency was unapologetically smoking Camels, quaffing a glass of red, and hitting the golf course whenever he could.

There could hardly have been a more diametrically opposed figure to represent the opposition party in President Barack Obama's Washington. But when Boehner announced his resignation, President Obama called to tell the outgoing Speaker that he'd miss him. "Mr. President," Boehner replied, "yes you will." He thought of himself as a "regular guy with a big job," and he enjoyed it.

In addition to his own stories of life in the swamp city and of his comeback after getting knocked off the leadership ladder, Boehner offers his impressions of leaders he's met and what made them successes or failures, from Ford and Reagan to Obama, Trump, and Biden. He shares his views on how the Republican Party has become unrecognizable today; the advice--some harsh, some fatherly--he dished out to members of his own party, the opposition, the media, and others; and his often acid-tongued comments about his former colleagues. And of course he talks about golfing with five presidents.

Through Speaker Boehner's honest and self-aware reflections, you'll be reminded of a time when the adults were firmly in charge.

The book, On the House: A Washington Memoir [Bulk, Wholesale, Quantity] ISBN# 9781250238443 in Hardcover by John Boehner may be ordered in bulk quantities. Minimum starts at 25 copies. Availability based on publisher status and quantity being ordered.
View AllClose

The Yellow House: A Memoir

MSRP:
Now:
As low as
Was:
A NEW YORK TIMES BESTSELLER FINALIST FOR THE NATIONAL BOOK AWARD FOR NONFICTION A brilliant, haunting and unforgettable memoir from a stunning new talent about the inexorable pull of home and...

No Higher Honor: A Memoir of My Years in Washington [Hardcover]

MSRP:
Now:
As low as
Was:
From one of the world's most admired women, this is former National Security Advisor and Secretary of State Condoleezza Rice's compelling story of eight years serving at the highest levels of...

No Higher Honor: A Memoir of My Years in Washington

MSRP:
Now:
As low as
Was:
From one of the world’s most admired women, this is former National Security Advisor and Secretary of State Condoleezza Rice’s compelling story of eight years serving at the highest levels of...

In the Dream House: A Memoir

MSRP:
Now:
As low as
Was:
A revolutionary memoir about domestic abuse by the award-winning author of Her Body and Other Parties In the Dream House is Carmen Maria Machado’s engrossing and wildly innovative account of a...

MSRP:
Now:
As low as
Was:
Lily loves working at Greengates Riding Stables, but she can... The book, A New Beginning [Bulk, Wholesale, Quantity] ISBN# 9780448450445 in Paperback by Bentley, Sue may be ordered in bulk...

MSRP:
Now:
As low as
Was:
Until recently, Artemis Fowl was the only human to have discovered that magical beings do indeed exist. But now a second juvenile genius wants to capture a demon for scientific study. Only an ancient...

Two Beats Ahead: What Musical Minds Teach Us about Innovation

MSRP:
Now:
As low as
Was:
Discover what the musical mind has to teach us about innovation in this fascinating book, featuring interviews with Justin Timberlake, Pharrell Williams, T Bone Burnett, Gloria Estefan, Imogen Heap,...

MSRP:
Now:
As low as
Was:
A transformative guide to building more fulfilling relationships with colleagues, friends, partners, and family, based on the landmark Interpersonal Dynamics (“Touchy-Feely”) course at Stanford’s...

MSRP:
Now:
As low as
Was:
A true classic, Where the Red Fern Grows by Wilson Rawls has been read by millions since its publication. This heartwarming story has been shared and read in classrooms for years because of its...

MSRP:
Now:
As low as
Was:
From the author of treasured educational titles like Chains comes another riveting work of historical fiction. Author Laurie Halse Anderson tells a story focused on one young girl's immense struggle...

Elon Musk: Tesla, Spacex, and the Quest for a Fantastic Future [Paperback]

MSRP:
Now:
As low as
Was:
New York Times and International Bestseller - Named One of the Best Books of the Year by The Wall Street Journal, NPR, Audible and Amazon In the spirit of Steve Jobs and Moneyball, Elon Musk is both...

The Fire and the Darkness: The Bombing of Dresden, 1945 [Hardcover]

MSRP:
Now:
As low as
Was:
A gripping work of narrative nonfiction recounting the history of the Dresden Bombing, one of the most devastating attacks of World War II. On February 13th, 1945 at 10:03 PM, British bombers began...

MSRP:
Now:
As low as
Was:
From the award-winning, New York Times- bestselling author of The Monsters of Templeton and Arcadia, one of the most anticipated books of the fall: an exhilarating novel about marriage, creativity,...