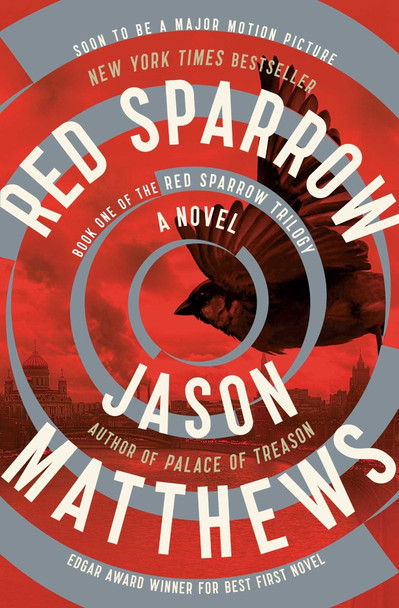 Soon to be a major motion picture starring Jennifer Lawrence and Joel Edgerton! In the tradition of John le Carré, the bestselling, impossible-to-put-down, espionage thriller that is “a primer in twenty-first century spying” (The New York Times Book Review), written with the insider detail that only a veteran CIA operative could know—and shortlisted for an Edgar Award. State intelligence officer Dominika Egorova struggles to survive in the cast-iron bureaucracy of post-Soviet intelligence. Drafted against her will to become a “Sparrow,” a trained seductress in the service, Dominika is assigned to operate against Nathaniel Nash, a first-tour CIA officer who handles the CIA’s most sensitive penetration of Russian intelligence. The two young intelligence officers, trained in their respective spy schools, collide in a charged atmosphere of tradecraft, deception, and, inevitably, a forbidden spiral of carnal attraction that threatens their careers and the security of America’s most valuable mole in Moscow. Seeking revenge against her soulless masters, Dominika begins a fateful double life, recruited by the CIA to ferret out a high-level traitor in Washington; hunt down a Russian illegal buried deep in the US military and, against all odds, to return to Moscow as the new-generation penetration of Putin’s intelligence service. Dominika and Nathaniel’s impossible love affair and twisted spy game come to a deadly conclusion in the shocking climax of this electrifying, up-to-the minute spy thriller. Taking place in today’s Russia, still ruled with an iron fist by Prime Minister Vladimir Putin, Red Sparrow displays author Jason Matthews’s insider knowledge of espionage, counter-espionage, surveillance tradecraft, recruiting spies, interrogation, and intelligence gathering. As The Washington Post hails, this is a “sublime and sophisticated debut…a first-rate novel as noteworthy for its superior style as for its gripping depiction of a secretive world.”

The book, Red Sparrow: A Novel (The Red Sparrow Trilogy) [Bulk, Wholesale, Quantity] ISBN# 9781476706139 in Paperback by Jason Matthews may be ordered in bulk quantities. Minimum starts at 25 copies. Availability based on publisher status and quantity being ordered.
View AllClose

MSRP:
Now:
As low as
Was:
A story of friendship that can inspire anyone, even robots, to dream . . . When Little Bot is thrown out with the garbage, he finds himself in a strange new world. Fortunately, Sparrow is there to...

MSRP:
Now:
As low as
Was:
Subhi is a refugee. He was born in an Australian permanent detention center after his mother and sister fled the violence of a distant homeland, and the center is the only world he knows. But every...

MSRP:
Now:
As low as
Was:
A perfect summer read set in a mysterious artists' estate in the idyllic Midwestern countryside It's the summer before seventh grade, and twelve-year-old Raine O'Rourke's mother takes a sudden job at...

MSRP:
Now:
As low as
Was:
Sparrow has always had a difficult time making friends. She would always rather stay home on the weekends with her mother, an affluent IT executive at a Manhattan bank, reading, or watching the...

MSRP:
Now:
As low as
Was:
With the opening line of Silver Sparrow, “My father, James Witherspoon, is a bigamist,” author Tayari Jones unveils a breathtaking story about a man’s deception, a family’s complicity, and the two...

The Decadent Society: America Before and After the Pandemic

MSRP:
Now:
As low as
Was:
From the New York Times columnist and bestselling author of Bad Religion, a powerful portrait of how our turbulent age is defined by dark forces seemingly beyond our control Today the Western world...

MSRP:
Now:
As low as
Was:
At a time when healthcare and medical insurance are more important than ever comes this authoritative, unbiased new volume in the acclaimed Get What’s Yours series. Healthcare expert Philip Moeller...

Vendetta in Death: An Eve Dallas Novel (In Death #49) [Hardcover]

MSRP:
Now:
As low as
Was:
Lieutenant Eve Dallas must keep the predator from becoming the prey in Vendetta in Death, the newest thriller from the #1 New York Times bestselling author J.D. Robb. She calls herself Lady Justice...

The Devil's Harvest: A Ruthless Killer, a Terrorized Community, and the Search for Justice in California's Central Valley

MSRP:
Now:
As low as
Was:
In the tradition of authors Jill Leovy and Beth Macy, award-winning Buzzfeed investigative journalist Jessica Garrison unravels the real-life story of Jose Martinez, a serial killer and drug cartel...

MSRP:
Now:
As low as
Was:
Billy Buckhorn’s uncanny intuition became apparent at an early age. In the course of this exciting series, Billy’s supernatural abilities grow and develop, and his reputation as a gifted “holy man”...

MSRP:
Now:
As low as
Was:
This is the most "User-Friendly" yoga book available! It contains the entire Primary and Intermediate series of Ashtanga Yoga with three options for every asana. Spiral bound to easily remain open...