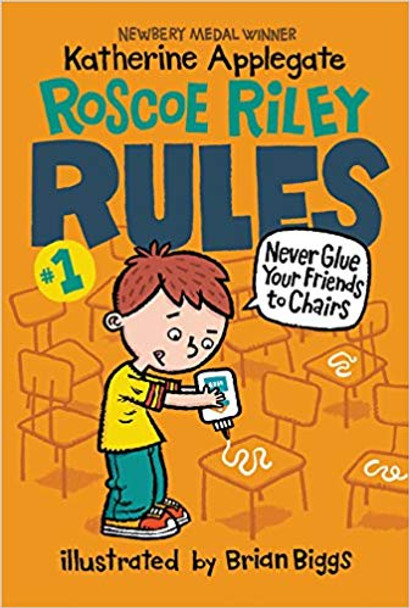 MSRP:
Now: List Price $4.99
Was:
— You save
Paperback
This product qualifies for FREE US Ground Shipping on orders over $100.

The hilarious chapter book series about an accidental rule breaker from Katherine Applegate—Newbery Medal winning and bestselling author of The One and Only Ivan, Crenshaw, and Wishtree—returns with a fresh new look from artist Brian Biggs and bonus material! When his classmates can’t sit still for a big performance at school, Roscoe Riley takes matters into his own hands with a liberal dose of Super-Mega-Gonzo Glue—which his mom calls the don’t-you-dare glue because Roscoe isn’t supposed to use it. Roscoe doesn’t mean to break the rules—he just can’t help himself! After all, his teacher’s job might be at stake and desperate times call for desperate measures. Roscoe and his comical misadventures will appeal to fans of Megan McDonald’s Stink series; Nancy Krulik’s George Brown, Class Clown series; Rebecca Elliott’s Owl Diaries series; and Dan Gutman’s My Weirder School series. This repackaged edition includes Roscoe Riley’s Time-Out Activities, featuring lists, games, and more.

The book, Roscoe Riley Rules #1: Never Glue Your Friends to Chairs [Bulk, Wholesale, Quantity] ISBN# 9780062392480 in Paperback by Katherine Applegate; Brian Biggs may be ordered in bulk quantities. Minimum starts at 25 copies. Availability based on publisher status and quantity being ordered.
View AllClose

The Summer of Riley

MSRP:
Now:
As low as
Was:
Maybe that's one of the reasons people get dogs, to kind of close up the empty places inside them." Eleven-year-old William never needed a friend more than now. After his parents' separation, his...

MSRP:
Now:
As low as
Was:
Everybody has a favorite animal. Some like little white dogs or big black cats or hoppy brown bunnies best. Others prefer squishy snails or tall giraffes or sleek black panthers. With beautiful...

The Memo: Five Rules for Your Economic Liberation

MSRP:
Now:
As low as
Was:
True power in this world comes from economic independence, but too many people have too much month left at the end of their money. John Hope Bryant, founder and CEO of Operation HOPE, illuminates the...

How to Lose All Your Friends

MSRP:
Now:
As low as
Was:
With exuberant pictures and a tongue-in-cheek sense of humor, the author of I Like Me! takes a light-hearted look at bratty behavior that will have children laughing in recognition while learning...

Love Your Job: The New Rules for Career Happiness

MSRP:
Now:
As low as
Was:
AWARDS: Independent Publisher Book Award 2015 (Silver) and National Mature Media Award 2015 (Bronze) Step-by-step tips for revitalizing your career Yes, it is possible to have a job you love, and it...

The Blue Zones of Happiness: Lessons from the World's Happiest People

MSRP:
Now:
As low as
Was:
New York Times best-selling author Dan Buettner reveals the surprising secrets of the world's happiest places—and shows how we can all apply the lessons of true happiness to our lives. In this...

MSRP:
Now:
As low as
Was:
Celebrate the South's favorite mayonnaise and learn how to cook with it in new delicious ways with this cookbook from food writer and Duke's lover Ashley Freeman. Mayonnaise is one of those...

The Wake Up: Closing the Gap Between Good Intentions and Real Change

MSRP:
Now:
As low as
Was:
Waking Up to Our Capacity to Transform Ourselves and the World As we become more aware of various social injustices in the world, many of us want to be part of the movement toward positive...

Einstein's Fridge: How the Difference Between Hot and Cold Explains the Universe

MSRP:
Now:
As low as
Was:
An entertaining, eye-opening account of the extraordinary team of innovators who discovered the laws of thermodynamics essential to understanding the world today—from refrigeration and jet engines to...

MSRP:
Now:
As low as
Was:
Introduction and Notes by Dr Sally Minogue, Canterbury Christ Church University College. Jane Eyre ranks as one of the greatest and most perennially popular works of English fiction. Although the...