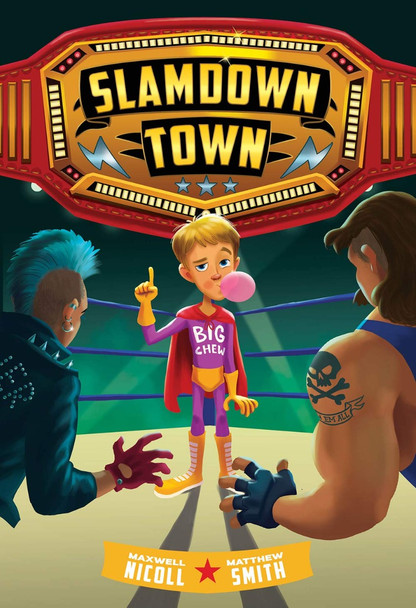 MSRP:
Now: List Price $14.99
Was:
— You save
Hardcover
This product qualifies for FREE US Ground Shipping on orders over $100.

Ollie and his older brother, Hollis, have wrestling in their blood: Their mom was a pro whose dreams of stardom were dashed by a devious opponent. Now she’s an overworked, underpaid ref at Slamdown Town, the local arena. Ollie’s goal in life is to win the golden championship belt for his mom—immediately followed by his other goal: to hang his bully of a brother from the roof by his tightie-whities. But there’s one problem: Ollie inherited their estranged dad’s puny frame, while Hollis got their mom’s brawn. Thus Ollie has resigned himself to a fate of wrestling mediocrity and wet willies . . . until the day Hollis gifts him a piece of stale gum and forces him to chew it. Ollie soon discovers that the gum—bought on eBay and formerly chewed by a wrestling legend— has an unusual side effect: the ability to physically transform Ollie into a pro wrestler. As Big Chew, Ollie’s finally able to put Hollis in his place and be a star. But when trouble befalls his family, being Big Chew gets a lot more complicated. In the end, Ollie knows he can’t have it all; and it’s only when he asks himself who he really is that he learns what it means to be a champion.

MSRP:
Now:
As low as
Was:
Quentin Jacobsen has spent a lifetime loving the magnificent Margo Roth Spiegelman from afar.... The book, Paper Towns [Bulk, Wholesale, Quantity] ISBN# 9780525478188 in Hardcover by Green, John may...

MSRP:
Now:
As low as
Was:
I dump it inMeet Mr. Gilly. He cleans up Trashy Town. He does it with a big smile and a big truck--which is sure to make him a hero with all the children in the neighborhood.... The book, Trashy Town...

MSRP:
Now:
As low as
Was:
#1 bestselling author John Green like you've never read him before. Introducing Penguin Minis! Featured by The New York Times, The Washington Post, BBC's "The World," Real Simple, Bustle, and more! ...

This Is My Town

MSRP:
Now:
As low as
Was:
Welcome to Critterville!Little Critter r shares what he knows about his neighbors and the places to go in Critterville. Who delivers the mail? Where does Little Critter go to see a movie? Who keeps...

MSRP:
Now:
As low as
Was:
In 1860, long after the United States outlawed the importation of enslaved laborers, 110 men, women and children from Benin and Nigeria were captured and brought to Mobile, Alabama aboard a ship...

MSRP:
Now:
As low as
Was:
From Guillermo del Toro and DreamWorks Animation's Emmy® Award-winning Netflix series, comes a graphic novel with another quest for teenage Jim Lake, Jr., and his friends--human and Troll! The title...

MSRP:
Now:
As low as
Was:
The hilarious chapter book series about an accidental rule breaker from Katherine Applegate—Newbery Medal winning and bestselling author of The One and Only Ivan, Crenshaw, and Wishtree—returns with...

MSRP:
Now:
As low as
Was:
An ounce of courage. A leap of faith. Together, they propel two young women to chase a new life—one that’s reimagined from what they might have become. In turn-of-the-century America, a young girl...

MSRP:
Now:
As low as
Was:
It’s hands-on science with a capital “E”—for engineering. Beginning with the toppling of the Colossus of Rhodes, one of the seven wonders of the ancient world, to the destructive, laserlike sunbeams...

MSRP:
Now:
As low as
Was:
Inside this book are 18 easy-to-make crafts taken straight from the pages of Laura Ingalls Wilder's "Little House" books. From Laura's corncob doll to Mary's Christmas tassels, and from Ma's button...

MSRP:
Now:
As low as
Was:
A National Book Award Finalist for Young People’s Literature. Ghost wants to be the fastest sprinter on his elite middle school track team, but his past is slowing him down in this first electrifying...

MSRP:
Now:
As low as
Was:
Donald Trump is eroding the rule of law! We’ve heard it said many times, and we can feel it in our guts. But what does “rule of law” really mean? And what happens when it breaks down? From Richard...