The Ballad of Songbirds and Snakes (a Hunger Games Novel) 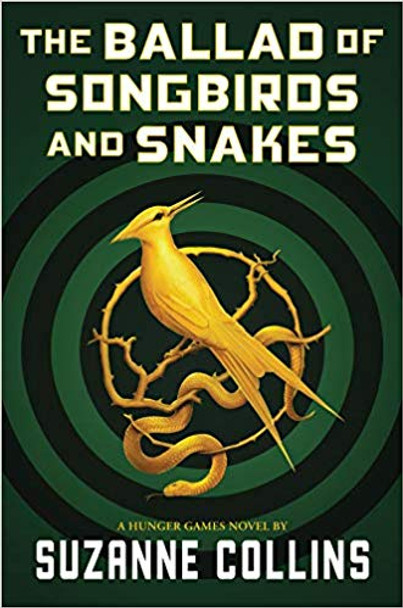 The Ballad of Songbirds and Snakes (a Hunger Games Novel)

Ambition will fuel him.
Competition will drive him.
But power has its price.

It is the morning of the reaping that will kick off the tenth annual Hunger Games. In the Capitol, eighteen-year-old Coriolanus Snow is preparing for his one shot at glory as a mentor in the Games. The once-mighty house of Snow has fallen on hard times, its fate hanging on the slender chance that Coriolanus will be able to outcharm, outwit, and outmaneuver his fellow students to mentor the winning tribute.

The odds are against him. He’s been given the humiliating assignment of mentoring the female tribute from District 12, the lowest of the low. Their fates are now completely intertwined — every choice Coriolanus makes could lead to favor or failure, triumph or ruin. Inside the arena, it will be a fight to the death. Outside the arena, Coriolanus starts to feel for his doomed tribute . . . and must weigh his need to follow the rules against his desire to survive no matter what it takes.


The book, The Ballad of Songbirds and Snakes (a Hunger Games Novel) [Bulk, Wholesale, Quantity] ISBN# 9781338635171 in Hardcover by Suzanne Collins may be ordered in bulk quantities. Minimum starts at 25 copies. Availability based on publisher status and quantity being ordered.
View AllClose

MSRP:
Now: $18.99
Was:
Against all odds, Katniss Everdeen has survived the Hunger Games twice. But now that she's made it out of the bloody arena alive, she's still not safe. The Capitol is angry. The Capitol wants revenge...

MSRP:
Now: $19.99
Was:
In this best-selling, post-apocalyptic vision of Panem, the former United States, each district must pay an annual tribute to the tyrannical government by sending two young representatives to The...

MSRP:
Now: $18.99
Was:
The book no one can stop talking about . . . In the ruins of a place once known as North America lies the nation of Panem, a shining Capitol surrounded by twelve outlying districts. The Capitol is...

MSRP:
Now: $12.99
Was:
Made into a major motion picture, the Hunger Games series has captured readers all around the world. The imaginative world, gripping suspense and adventure, compelling character development and...

MSRP:
Now: $28.00
Was:
The shocking truth about postwar adoption in America, told through the bittersweet story of one teenager, the son she was forced to relinquish, and their search to find each other During the Baby...

The Checklist Manifesto: How to Get Things Right [Hardcover]

MSRP:
Now: $30.00
Was:
We live in a world of great and increasing complexity, where even the most expert professionals struggle to master the tasks they face. Longer training, ever more advanced technologies―neither seems...

MSRP:
Now: $28.00
Was:
A ground-breaking and brave inside reckoning with the nexus of prison and profit in America: in one Louisiana prison and over the course of our country's history. In 2014, Shane Bauer was hired for...

MSRP:
Now: $18.99
Was:
Drawing upon a six-year research project at the Stanford University Graduate School of Business, James C. Collins and Jerry I. Porras took eighteen truly exceptional and long-lasting companies and...

MSRP:
Now: $8.99
Was:
A mass-market paperback edition of The Magician's Nephew, book one in the classic fantasy series, The Chronicles of Narnia, featuring cover art by Cliff Nielsen and black-and-white interior artwork...

Whoever You Are [Paperback]

MSRP:
Now: $4.99
Was:
“Little one, / whoever you are, / wherever you are, / there are little ones / just like you / all over the world.” So begins the Australian author Mem Fox’s joyful picture book Whoever You Are, a...

MSRP:
Now: $9.45
Was:
Pride and Prejudice is a novel of manners by Jane Austen, first published in 1813. The story follows the main character, Elizabeth Bennet, as she deals with issues of manners, upbringing, morality,...

Believe in People: Bottom-Up Solutions for a Top-Down World [Hardcover]

MSRP:
Now: $29.99
Was:
A surprising take on how you can help tackle the really big problems in society–from one of America’s most successful entrepreneurs. People are looking for a better way. Towering barriers are...