The Hemingway Stories: As Featured in the Film by Ken Burns and Lynn Novick on PBS (Media Tie-In) 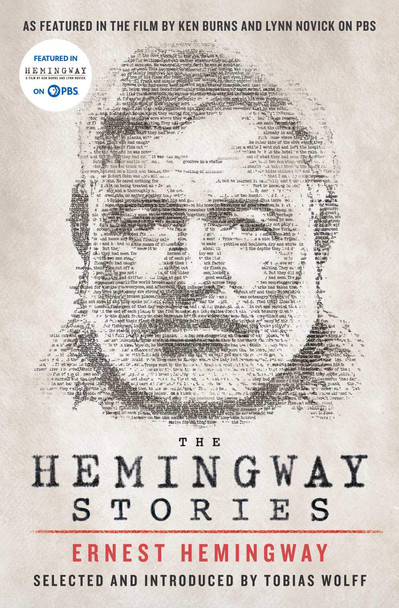 The Hemingway Stories: As Featured in the Film by Ken Burns and Lynn Novick on PBS (Media Tie-In)

A new collection showcasing the best of Ernest Hemingway’s short stories including his well-known classics, as featured in the magnificent three-part, six-hour PBS documentary by Ken Burns and Lynn Novick—introduced by award-winning author Tobias Wolff.

Ernest Hemingway, a literary icon and considered one of the greatest American writers of all time, is the subject of a major documentary by award-winning filmmakers Ken Burns and Lynn Novick. This intimate portrait of Hemingway—who brilliantly captured the complexities of the human condition in spare and profound prose, and whose work remains deeply influential in literature and culture—interweaves a close study of biographical events with excerpts from his work.

The Hemingway Stories features Hemingway’s most significant short stories in chronological order, so viewers of the film as well as fans old and new can follow the trajectory of his impressive life and career. Hemingway’s beloved classics, such as “The Short and Happy Life of Francis Macomber,” “Up in Michigan,” “Indian Camp,” and “The Snows of Kilimanjaro,” are accompanied by fresh insights from renowned writers around the world—Mario Vargas Llosa, Edna O’Brien, Abraham Verghese, Tim O’Brien, and Mary Karr. Tobias Wolff's introduction adds a new perspective to Hemingway’s work, and Wolff has selected additional stories that demonstrate Hemingway’s talent and range.

The power of the Ernest Hemingway’s revolutionary style is perhaps most striking in his short stories, and here readers can encounter the tales that created the legend: stories of men and women in love and in war and on the hunt, stories of a lost generation born into a fractured time. This collection is a perfect introduction for a new generation of Hemingway readers and a vital volume for any fan.

The book, The Hemingway Stories: As Featured in the Film by Ken Burns and Lynn Novick on PBS (Media Tie-In) [Bulk, Wholesale, Quantity] ISBN# 9781982179465 in Paperback by Ernest Hemingway;Tobias Wolff (Introduction by) may be ordered in bulk quantities. Minimum starts at 25 copies. Availability based on publisher status and quantity being ordered.
View AllClose

A Farewell to Arms (Hemingway Library)

MSRP:
Now:
As low as
Was:
Written when Ernest Hemingway was thirty years old and lauded as the best American novel to emerge from World War I, A Farewell to Arms is the unforgettable story of an American ambulance driver on...

MSRP:
Now:
As low as
Was:
THE ONLY COMPLETE COLLECTION BY THE NOBEL PRIZE-WINNING AUTHOR In this definitive collection of Ernest Hemingway's short stories, readers will delight in the author's most beloved classics such as...

MSRP:
Now:
As low as
Was:
Great American Short Stories: From Hawthorne to Hemingwayis part of the Barnes & Noble Classics series, which offers quality editions at affordable prices to the student and the general reader,...

A Christmas Story: The Book That Inspired the Hilarious Classic Film

MSRP:
Now:
As low as
Was:
A beloved, bestselling classic of humorous and nostalgic Americana—the book that inspired the equally classic Yuletide film. The holiday film A Christmas Story, first released in 1983, has become a...

First Man: The Life of Neil A. Armstrong (Media Tie-In)

MSRP:
Now:
As low as
Was:
This is the first—and only—definitive authorized account of Neil Armstrong, the man whose “one small step” changed history. When Apollo 11 touched down on the Moon’s surface in 1969, the first man on...

How to Write a Mystery: A Handbook from Mystery Writers of America

MSRP:
Now:
As low as
Was:
From the most successful mystery writers in the business, an invaluable guide to crafting mysteries—from character development and plot to procedurals and thrillers—a must-have for every aspiring...

MSRP:
Now:
As low as
Was:
From three top innovation experts at IMD Business School comes a smart new model for innovative thinking and problem solving. How do people come up with truly original ideas? For the past decade,...

Quiero a mi Mama Porque.../ I Love My Mommy Because...

MSRP:
Now:
As low as
Was:
"I love my mommy because she gives me great big hugs." "I love my daddy because he takes naps with me." These two beloved, best-selling concept books, richly illustrated by Ashley Wolff, are now...

I Am a Girl from Africa

MSRP:
Now:
As low as
Was:
The inspiring journey of a girl from Africa whose near-death experience sparked a dream that changed the world. When severe draught hit her village in Zimbabwe, Elizabeth, then eight, had no idea...

The Agitators: Three Friends Who Fought for Abolition and Women's Rights

MSRP:
Now:
As low as
Was:
From the intimate perspective of three friends and neighbors in mid-nineteenth century Auburn, New York—the “agitators” of the title—acclaimed author Dorothy Wickenden tells the fascinating and...

MSRP:
Now:
As low as
Was:
A story about friendships and commitment to one another so incredible you wouldn't believe it if it wasn't true.Kevan is just one of the guys. It's impossible to know him and not become a little more...