The Problem of Alzheimer's: How Science, Culture, and Politics Turned a Rare Disease Into a Crisis and What We Can Do about It 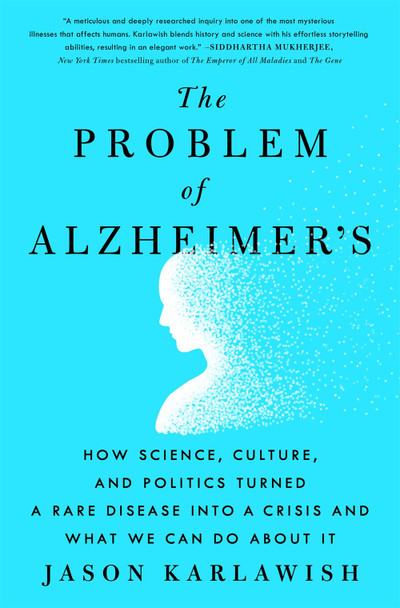 The Problem of Alzheimer's: How Science, Culture, and Politics Turned a Rare Disease Into a Crisis and What We Can Do about It

A definitive and compelling book on one of today's most prevalent illnesses.

In 2020, an estimated 5.8 million Americans had Alzheimer’s, and more than half a million died because of the disease and its devastating complications. 16 million caregivers are responsible for paying as much as half of the $226 billion annual costs of their care. As more people live beyond their seventies and eighties, the number of patients will rise to an estimated 13.8 million by 2025.

Part case studies, part meditation on the past, present and future of the disease, The Problem of Alzheimer's traces Alzheimer’s from its beginnings to its recognition as a crisis. While it is an unambiguous account of decades of missed opportunities and our health care systems’ failures to take action, it tells the story of the biomedical breakthroughs that may allow Alzheimer’s to finally be prevented and treated by medicine and also presents an argument for how we can live with dementia: the ways patients can reclaim their autonomy and redefine their sense of self, how families can support their loved ones, and the innovative reforms we can make as a society that would give caregivers and patients better quality of life.

Rich in science, history, and characters, The Problem of Alzheimer's takes us inside laboratories, patients' homes, caregivers’ support groups, progressive care communities, and Jason Karlawish's own practice at the Penn Memory Center.

The book, The Problem of Alzheimer's: How Science, Culture, and Politics Turned a Rare Disease Into a Crisis and What We Can Do about It [Bulk, Wholesale, Quantity] ISBN# 9781250218735 in Hardcover by Jason Karlawish may be ordered in bulk quantities. Minimum starts at 25 copies. Availability based on publisher status and quantity being ordered.

The Big Ones: How Natural Disasters Have Shaped Us (And What We Can Do about Them)

MSRP:
Now:
As low as
Was:
By the world-renowned seismologist, a riveting history of natural disasters, their impact on our culture, and new ways of thinking about the ones to come Earthquakes, floods, tsunamis, hurricanes,...

Meltdown: Why Our Systems Fail and What We Can Do About It

MSRP:
Now:
As low as
Was:
A groundbreaking take on how complexity causes failure in all kinds of modern systems--from social media to air travel--this practical and entertaining book reveals how we can prevent meltdowns in...

What Can a Body Do?: How We Meet the Built World

MSRP:
Now:
As low as
Was:
A fascinating and provocative new way of looking at the things we use and the spaces we inhabit, and a call to imagine a better-designed world for us all. Furniture and tools, kitchens and campuses...

Whistling Vivaldi: How Stereotypes Affect Us and What We Can Do

MSRP:
Now:
As low as
Was:
The acclaimed social psychologist offers an insider’s look at his research and groundbreaking findings on stereotypes and identity. Claude M. Steele, who has been called “one of the few great social...

Asking for It: The Alarming Rise of Rape Culture--And What We Can Do about It

MSRP:
Now:
As low as
Was:
Every seven minutes, someone in America commits a rape. And whether that's a football star, beloved celebrity, elected official, member of the clergy, or just an average Joe (or Joanna), there's...

MSRP:
Now:
As low as
Was:
Our Best-Selling Dictionary for Students! This updated and expanded dictionary was created for students in grades 3-6. An age-appropriate word list and kid-friendly definitions make it a favorite of...

How Beautiful We Were

MSRP:
Now:
As low as
Was:
From the celebrated author of the New York Times bestseller Behold the Dreamers comes a sweeping, wrenching story about the collision of a small African village and an American oil company. “A...

The Times I Knew I Was Gay

MSRP:
Now:
As low as
Was:
“Evocative, authentic, and hilarious.” —Tillie Walden, author of Spinning and On a Sunbeam A charming, highly relatable graphic memoir that follows one young woman’s adventures in coming out and...

MSRP:
Now:
As low as
Was:
From the New York Times bestselling author of I'm Judging You, a hilarious and transformational book about how to tackle fear--that everlasting hater--and audaciously step into lives, careers, and...

I Used to Have a Plan: But Life Had Other Ideas

MSRP:
Now:
As low as
Was:
Balm for the soul—Alessandra Olanow offers advice, inspiration, and encouragement for anyone who needs a shoulder to lean on during a difficult time. “I Know This Too Shall Pass. (But It Would Be...

There's No Plan B for Your A-Game: Be the Best in the World at What You Do

MSRP:
Now:
As low as
Was:
Now in paperback: the Washington Post, Wall Street Journal, USA Today, and Publishers Weekly Bestseller. Can you become the best in the world at what you do? This book shows you how. At nine years...

Amaze Every Customer Every Time: 52 Tools for Delivering the Most Amazing Customer Service on the Planet

MSRP:
Now:
As low as
Was:
What are you waiting for? Let the amazement begin! The best of the best know that no matter how great the product or service, getting and keeping customers requires delivering an amazing experience,...

The Guaranteed Customer Experience: How to Win Customers by Keeping Your Promises

MSRP:
Now:
As low as
Was:
What if you could guarantee your customers an amazing experience-and then deliver on that promise every time? The Guaranteed Customer Experience turns the concept of a guarantee on its head. An...