The Sun Does Shine: How I Found Life and Freedom on Death Row (Oprah's Book Club Summer 2018 Selection) [Hardcover] 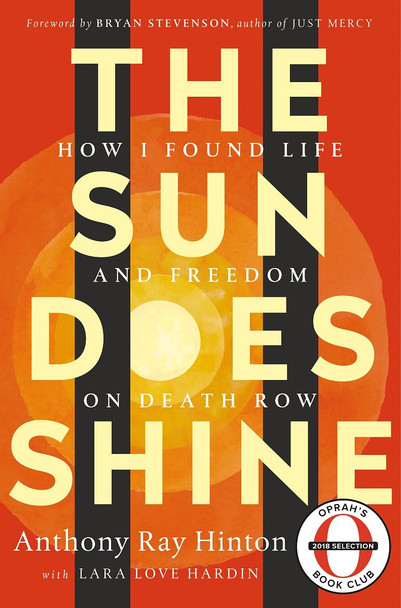 The Sun Does Shine: How I Found Life and Freedom on Death Row (Oprah's Book Club Summer 2018 Selection) [Hardcover]

A powerful, revealing story of hope, love, justice, and the power of reading by a man who spent thirty years on death row for a crime he didn't commit.

“An amazing and heartwarming story, it restores our faith in the inherent goodness of humanity.” ―Archbishop Desmond Tutu

In 1985, Anthony Ray Hinton was arrested and charged with two counts of capital murder in Alabama. Stunned, confused, and only twenty–nine years old, Hinton knew that it was a case of mistaken identity and believed that the truth would prove his innocence and ultimately set him free.

But with no money and a different system of justice for a poor black man in the South, Hinton was sentenced to death by electrocution. He spent his first three years on Death Row at Holman State Prison in agonizing silence―full of despair and anger toward all those who had sent an innocent man to his death. But as Hinton realized and accepted his fate, he resolved not only to survive, but find a way to live on Death Row. For the next twenty–seven years he was a beacon―transforming not only his own spirit, but those of his fellow inmates, fifty–four of whom were executed mere feet from his cell. With the help of civil rights attorney and bestselling author of Just Mercy, Bryan Stevenson, Hinton won his release in 2015.

With a foreword by Stevenson, The Sun Does Shine is an extraordinary testament to the power of hope sustained through the darkest times. Destined to be a classic memoir of wrongful imprisonment and freedom won, Hinton’s memoir tells his dramatic thirty–year journey and shows how you can take away a man’s freedom, but you can’t take away his imagination, humor, or joy.

The book, The Sun Does Shine: How I Found Life and Freedom on Death Row [Bulk, Wholesale, Quantity] ISBN# 9781250205797 in Hardcover by Anthony Ray Hinton;Lara Love Hardin;Bryan Stevenson may be ordered in bulk quantities. Minimum starts at 25 copies. Availability based on publisher status and quantity being ordered.
View AllClose

MSRP:
Now:
As low as
Was:
A compulsively readable debut novel about marriage, immigration, class, race, and the trapdoors in the American Dream—the unforgettable story of a young Cameroonian couple making a new life in New...

The Sun Does Shine: How I Found Life and Freedom on Death Row

MSRP:
Now:
As low as
Was:
A poignant and revolutionary memoir, The Sun Does Shine tells the powerful, revealing story of a man’s thirty years on death row, and how hope, love, justice, and the power of reading brought him...

The Sun Does Shine: How I Found Life, Freedom, and Justice [Paperback]

MSRP:
Now:
As low as
Was:
The New York Times bestseller and Oprah's Book Club 2018 Selection. Winner of the 2019 Moore Prize Finalist, Dayton Peace Prize, 2019 "An amazing and heartwarming story, it restores our faith in...

What Pet Should I Get? [Hardcover]

MSRP:
Now:
As low as
Was:
A #1 New York Times bestseller! This previously never-before-seen picture book by Dr. Seuss about making up one’s mind is the literary equivalent of buried treasure! What happens when a brother and...

MSRP:
Now:
As low as
Was:
Simple text and photos are used to present the responsibility of caring for pets.... The book, Taking Care of Pets (Yellow Umbrella Emergent Level) [Bulk, Wholesale, Quantity] ISBN# 9780736817189 in...

MSRP:
Now:
As low as
Was:
Christmas is twinkling through the town from candles on tables to lights on the trees. Let the real blinking lights on each page of this merry little book shine holiday cheer in your heart that you...

Dario and the Whale

MSRP:
Now:
As low as
Was:
When Dario and his mother move to Cape Cod from Brazil, Dario has a hard time making friends since he doesn't speak English well. But one day Dario meets someone else who has just arrived in New...

MSRP:
Now:
As low as
Was:
About the Series: Wellness Wally teaches kids about being adventurous and how using practices and approaches that originate from different places around world can improve health, wellness, and...

MSRP:
Now:
As low as
Was:
The book, Summer Of The Monkeys [ Bulk Wholesale Quantity ] ISBN 440415802 in by Rawls, Wilson may be ordered in bulk quantities . Bulk book availability based on publisher status and quantity being...

The Sleep Revolution: Transforming Your Life, One Night at a Time [Paperback]

MSRP:
Now:
As low as
Was:
We are in the midst of a sleep deprivation crisis, writes Arianna Huffington, the co-founder and editor in chief of The Huffington Post. And this has profound consequences – on our health, our job...

MSRP:
Now:
As low as
Was:
“A memoir that shines with a bright spirit, a generous heart and an entertaining knack for celebrating absurdity.”—The New York Times Book Review “This is Smith at her finest.”—Library Journal,...