The Unexpected Spy: From the CIA to the Fbi, My Secret Life Taking Down Some of the World's Most Notorious Terrorists 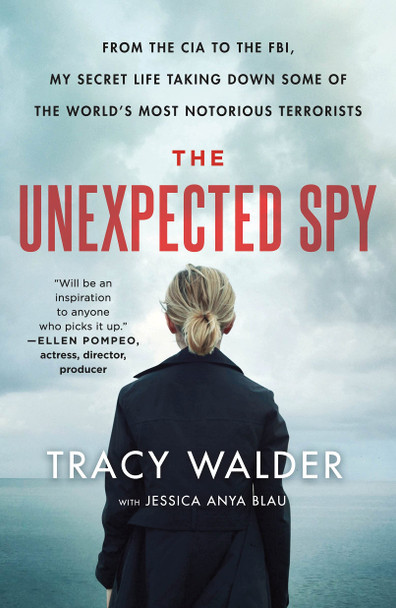 The Unexpected Spy: From the CIA to the Fbi, My Secret Life Taking Down Some of the World's Most Notorious Terrorists

A highly entertaining account of a young woman who went straight from her college sorority to the CIA, where she hunted terrorists and WMDs

"Reads like the show bible for Homeland only her story is real." ―Alison Stewart, WNYC

When Tracy Walder enrolled at the University of Southern California, she never thought that one day she would offer her pink beanbag chair in the Delta Gamma house to a CIA recruiter, or that she’d fly to the Middle East under an alias identity.

The Unexpected Spy is the riveting story of Walder's tenure in the CIA and, later, the FBI. In high-security, steel-walled rooms in Virginia, Walder watched al-Qaeda members with drones as President Bush looked over her shoulder and CIA Director George Tenet brought her donuts. She tracked chemical terrorists and searched the world for Weapons of Mass Destruction. She created a chemical terror chart that someone in the White House altered to convey information she did not have or believe, leading to the Iraq invasion. Driven to stop terrorism, Walder debriefed terrorists―men who swore they’d never speak to a woman―until they gave her leads. She followed trails through North Africa, Europe, and the Middle East, shutting down multiple chemical attacks.

Then Walder moved to the FBI, where she worked in counterintelligence. In a single year, she helped take down one of the most notorious foreign spies ever caught on American soil. Catching the bad guys wasn’t a problem in the FBI, but rampant sexism was. Walder left the FBI to teach young women, encouraging them to find a place in the FBI, CIA, State Department or the Senate―and thus change the world.

The book, The Unexpected Spy: From the CIA to the Fbi, My Secret Life Taking Down Some of the World's Most Notorious Terrorists [Bulk, Wholesale, Quantity] ISBN# 9781250239716 in Paperback by Tracy Walder;Jessica Anya Blau may be ordered in bulk quantities. Minimum starts at 25 copies. Availability based on publisher status and quantity being ordered.
View AllClose

The Secrets of My Life

MSRP:
Now:
As low as
Was:
In this remarkable memoir-written during her pivotal first years of becoming her authentic self-Caitlyn Jenner reflects on her past as she looks to her future. "Imagine denying your core and soul...

The Master of Disguise: My Secret Life in the CIA

MSRP:
Now:
As low as
Was:
From the author of Argo comes an unforgettable behind-the-scenes story of espionage in action. In the first ever memoir by a top-level operative to be authorized by the CIA, Antonio J. Mendez reveals...

MSRP:
Now:
As low as
Was:
After observing her teacher at the supermarket, at the mall, and even in a park, a young child begins to think that the teacher has a secret lifeThe book, My Teacher's Secret Life ISBN 9780689802713...

The Nazi Hunters: How a Team of Spies and Survivors Captured the World's Most Notorious Nazi

MSRP:
Now:
As low as
Was:
A thrilling spy mission, a moving Holocaust story, and a first-class work of narrative nonfiction. In 1945, at the end of World War II, Adolf Eichmann, the head of operations for the Nazis' Final...

The Unexpected Spy: From the CIA to the Fbi, My Secret Life Taking Down Some of the World's Most Notorious Terrorists [Hardcover]

MSRP:
Now:
As low as
Was:
A highly entertaining account of a young woman who went straight from her college sorority to the CIA, where she hunted terrorists and WMDs. When Tracy Walder enrolled at the University of Southern...

MSRP:
Now:
As low as
Was:
The Catholic Picture Bible by Rev. Lawrence G. Lovasik, S.V.D. is a wonderful and highly-acclaimed collection of Bible stories for children. Set in large easy-to-read type, children will learn about...

Crispr People: The Science and Ethics of Editing Humans

MSRP:
Now:
As low as
Was:
What does the birth of babies whose embryos had gone through genome editing mean--for science and for all of us? In November 2018, the world was shocked to learn that two babies had been born in...

Recalculating: Navigate Your Career Through the Changing World of Work

MSRP:
Now:
As low as
Was:
A leading workplace expert provides an inspirational, practical, and forward-looking career playbook for recent grads, career changers, and transitioning professionals looking to thrive in today’s...

MSRP:
Now:
As low as
Was:
Little Hoo is a scaredy-owl but he's ready for his first visit to the beach. He might be anxious about sharks, seaweed and pinching crabs, but he soon discovers that playing at the beach is lots of...

MSRP:
Now:
As low as
Was:
Common-Sense, Purpose-Based Investing for Your Retirement with Steps and Strategies to Help You. This book begins with the idea that when we reach the age of 50, we need to change from a portfolio...

MSRP:
Now:
As low as
Was:
Calling all cat lovers and artists: this clever book by bestselling illustrator Lulu Mayo will tickle your creative funny bone! Whether you want to sketch your inner happy cat or create a...

Between Shades of Gray

MSRP:
Now:
As low as
Was:
Fifteen-year-old Lina is a Lithuanian girl living an ordinary life--until Soviet officers invade her home and tear her family apart. Separated from her father and forced onto a crowded train, Lina,...

It's Kind of a Funny Story

MSRP:
Now:
As low as
Was:
Like many ambitious New York City teenagers, Craig Gilner sees entry into Manhattan's Executive Pre-Professional High School as the ticket to his future. Determined to succeed at life-which means...

MSRP:
Now:
As low as
Was:
A scathing exploration into the heart of Silicon Valley, laying bare the greed, hubris, and retrograde politics of an industry that aspires to radically transform society for its own benefit At the...