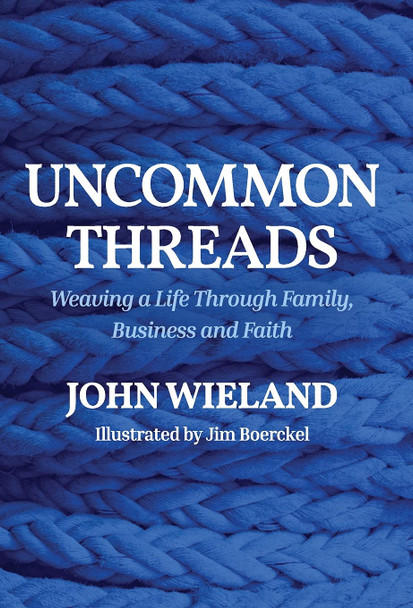 John Wieland is the first to admit his success is baffling.

When an average Joe turns a bankrupt company into a 30-branch business that earns over $300 million in revenue and gives 10 percent of the company profits to ministries across the world, Wieland is the first to ask: how did this happen?

His conclusion: business, family and faith affect each other in ways that few realize and together bring about success.

Unlike many books that discuss faith, Wieland never preaches perfection. It's his honesty about his own struggles-between worship and human instinct, between sacrifice and indulgence, between sharing his love of God with others and appreciating people right where they are-that makes Uncommon Threads so unique. In it, Wieland uses the lens of his own life to tackle important topics such as hypocrisy, racism, parenting, religion and even what happens when you take someone into your home only to later find out that he shot a lady in the head and left her for dead.

In the end, Wieland shows that family, business and faith are inescapably woven together and that the lessons you learn growing up can provide the values that serve you well throughout the rest of your life.

His is the story of a life well-spent. The combination of self-deprecating tales of his foibles and touching moments of inspiration received from both his successes and failures makes Uncommon Threads a must-read.

The book, Uncommon Threads [Bulk, Wholesale, Quantity] ISBN# 9781951407810 in Hardcover by John Wieland;James Boerckel may be ordered in bulk quantities. Minimum starts at 25 copies. Availability based on publisher status and quantity being ordered.
View AllClose

52 Uncommon Dates: A Couple's Adventure Guide for Praying, Playing, and Staying Together

MSRP:
Now:
As low as
Was:
Fun, creative, and spiritually engaging—these are no ordinary dates! Have you ever tried a photography date? A water date? What about a second first date? 52 Uncommon Dates is more than a book. . ...

MSRP:
Now:
As low as
Was:
Retired Navy SEAL and professional photographer Darren McBurnett takes readers behind the scenes into the elite SEAL training program, BUD/S, in Coronado, California. Striking, beautiful, and...

Becoming Supernatural: How Common People Are Doing the Uncommon

MSRP:
Now:
As low as
Was:
WALL STREET JOURNAL BESTSELLER The author of the New York Times bestseller You Are the Placebo, as well as Breaking the Habit of Being Yourself and Evolve Your Brain, draws on research conducted at...

MSRP:
Now:
As low as
Was:
John Wieland is the first to admit his success is baffling. When an average Joe turns a bankrupt company into a 30-branch business that earns over $300 million in revenue and gives 10 percent of...

The Heidi Chronicles - Uncommon Women and Others - Isn't It Romantic

MSRP:
Now:
As low as
Was:
The graduating seniors of a Seven Sisters college, trying to decide whether to pattern themselves after Katharine Hepburn or Emily Dickinson. Two young women besieged by the demands of mothers,...

In the Country We Love: My Family Divided (Updated with New Material)

MSRP:
Now:
As low as
Was:
The star of Orange is the New Black and Jane the Virgin presents her personal story of the real plight of undocumented immigrants in this country Diane Guerrero, the television actress from the...

MSRP:
Now:
As low as
Was:
John Wieland is the first to admit his success is baffling. When an average Joe turns a bankrupt company into a 30-branch business that earns over $300 million in revenue and gives 10 percent of...

MSRP:
Now:
As low as
Was:
Keep your brain young, healthy, and sharp with this science-driven guide to protecting your mind from decline by neurosurgeon and CNN chief medical correspondent Sanjay Gupta. Throughout our life,...

Out of My Mind [Paperback]

MSRP:
Now:
As low as
Was:
From award-winning author Sharon Draper comes Out of My Mind, the story of a brilliant girl who cannot speak or write. “If there is one book teens and parents (and everyone else) should read this...

MSRP:
Now:
As low as
Was:
From Blackstone chairman, CEO, and co-founder Stephen A. Schwarzman, a long-awaited book that uses impactful episodes from Schwarzman's life to show readers how to build, transform, and lead thriving...

How to Win Friends & Influence People: The Only Book You Need to Lead You to Success [Running Press Mini Books]

MSRP:
Now:
As low as
Was:
Please note this version is small with dimensions 3 x 0.8 x 3.5 inches. Dale Carnegie's rock-solid, time-tested advice has carried countless people up the ladder of success in their business and...