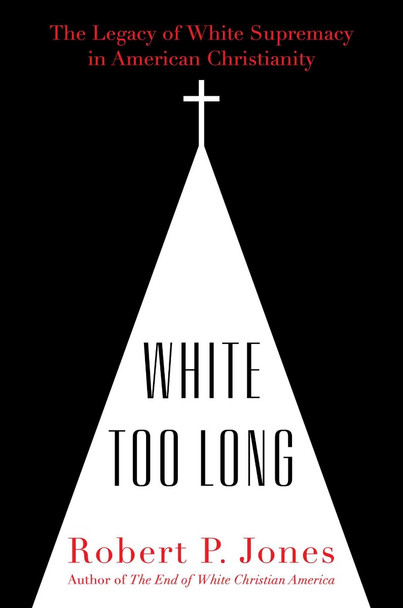 Drawing on history, public opinion surveys, and personal experience, Robert P. Jones delivers a provocative examination of the unholy relationship between American Christianity and white supremacy, and issues an urgent call for white Christians to reckon with this legacy for the sake of themselves and the nation.

As the nation grapples with demographic changes and the legacy of racism in America, Christianity’s role as a cornerstone of white supremacy has been largely overlooked. But white Christians—from evangelicals in the South to mainline Protestants in the Midwest and Catholics in the Northeast—have not just been complacent or complicit; rather, as the dominant cultural power, they have constructed and sustained a project of protecting white supremacy and opposing black equality that has framed the entire American story.

With his family’s 1815 Bible in one hand and contemporary public opinion surveys by Public Religion Research Institute (PRRI) in the other, Robert P. Jones delivers a groundbreaking analysis of the repressed history of the symbiotic relationship between Christianity and white supremacy. White Too Long demonstrates how deeply racist attitudes have become embedded in the DNA of white Christian identity over time and calls for an honest reckoning with a complicated, painful, and even shameful past. Jones challenges white Christians to acknowledge that public apologies are not enough—accepting responsibility for the past requires work toward repair in the present.

White Too Long is not an appeal to altruism. Drawing on lessons gleaned from case studies of communities beginning to face these challenges, Jones argues that contemporary white Christians must confront these unsettling truths because this is the only way to salvage the integrity of their faith and their own identities. More broadly, it is no exaggeration to say that not just the future of white Christianity but the outcome of the American experiment is at stake.

The book, White Too Long: The Legacy of White Supremacy in American Christianity [Bulk, Wholesale, Quantity] ISBN# 9781982122867 in Hardcover by Robert P. Jones may be ordered in bulk quantities. Minimum starts at 25 copies. Availability based on publisher status and quantity being ordered.

How We Fight White Supremacy: A Field Guide to Black Resistance

MSRP:
Now:
As low as
Was:
This celebration of Black resistance, from protests to art to sermons to joy, offers a blueprint for the fight for freedom and justice-and ideas for how each of us can contribute Many of us are...

Culture Warlords: My Journey Into the Dark Web of White Supremacy

MSRP:
Now:
As low as
Was:
A HARROWING JOURNEY INTO THE HEART OF WHITE SUPREMACY Talia Lavin is every skinhead's worst nightmare: a loud and unapologetic Jewish woman, acerbic, smart, and profoundly antiracist, with the...

Do Better: Spiritual Activism for Fighting and Healing from White Supremacy

MSRP:
Now:
As low as
Was:
Thought leader, racial justice educator, and sought-after spiritual activist Rachel Ricketts offers mindful and practical steps for all humans to dismantle white supremacy on a personal and...

MSRP:
Now:
As low as
Was:
"Layla Saad is one of the most important and valuable teachers we have right now on the subject of white supremacy and racial injustice."―New York Times bestselling author Elizabeth Gilbert Based on...

MSRP:
Now:
As low as
Was:
From the author of the New York Times bestseller So You Want to Talk About Race, a subversive history of white male American identity. What happens to a country that tells generation after...

Letters to the Church [Hardcover]

MSRP:
Now:
As low as
Was:
If God had it His way, what would your church look like? The New York Times bestselling author of Crazy Love challenges readers to be the Church as God intends. Do you want more from your...

Gorillas in the Mist

MSRP:
Now:
As low as
Was:
One of the most important books ever written about our connection to the natural world, GORILLAS IN THE MIST is the riveting account of Dian Fossey's thirteen years in a remote African rain forest...

What On Earth Am I Here For? Study Guide (The Purpose Driven Life)

MSRP:
Now:
As low as
Was:
In this six-session small group bible study (DVD/digital video sold separately), What On Earth Am I Here For?, Rick Warren helps users discover the answer to life’s most fundamental question: “What...

MSRP:
Now:
As low as
Was:
World-record endurance athlete and professional leadership coach Jason Caldwell draws on his amazing experiences to show how anyone can build and lead teams that accomplish incredible things. ...

MSRP:
Now:
As low as
Was:
Perfect for children of all ages, this heartfelt story opens the curtains on the story of how we can all feel together even when we are far apart. Out the window, I can see a new world looking...

Madam Speaker: Nancy Pelosi and the Lessons of Power

MSRP:
Now:
As low as
Was:
The definitive biography of Nancy Pelosi, the most powerful woman in American political history, written by New York Times bestselling author and ​USA Today Washington Bureau Chief Susan Page. The...

MSRP:
Now:
As low as
Was:
In this refreshingly honest book, the "Queen of Vibrators" and the "Orthodox Sex Guru" shares her easy, proven system to help women have a healthy, robust sex life. Myth: Great sex comes...

Hot Seat: What I Learned Leading a Great American Company

MSRP:
Now:
As low as
Was:
A memoir of successful leadership in times of crisis: the former CEO of General Electric, named one of the “World’s Best CEOs” three times by Barron’s, shares the hard-won lessons he learned from his...

Faith After Doubt: Why Your Beliefs Stopped Working and What to Do about It

MSRP:
Now:
As low as
Was:
From the author of A New Kind of Christianity comes a bold proposal: only doubt can save the world and your faith. "Will help you live fuller and breathe easier..” ―Glennon Doyle Sixty-five...