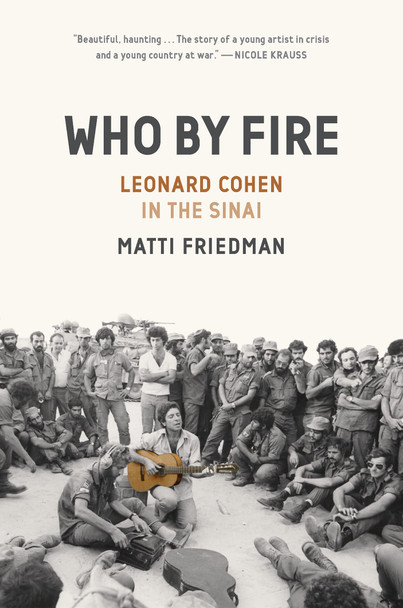 In October 1973, the poet and singer Leonard Cohen—thirty-nine years old, famous, unhappy, and at a creative dead end—traveled from his home on the Greek island of Hydra to the chaos and bloodshed of the Sinai desert when Egypt attacked Israel on the Jewish high holiday of Yom Kippur. Moving around the front with a guitar and a group of local musicians, Cohen met hundreds of young soldiers, men and women at the worst moment of their lives. Those who survived never forgot the experience. And the war transformed Cohen. He had announced that he was abandoning his music career, but he instead returned to Hydra and to his family, had a second child, and released one of the best albums of his career. In Who by Fire, journalist Matti Friedman gives us a riveting account of those weeks in the Sinai, drawing on Cohen’s previously unpublished writing and original reporting to create a kaleidoscopic depiction of a harrowing, formative moment for both a young country at war and a singer at a crossroads.

The book, Who by Fire: Leonard Cohen in the Sinai [Bulk, Wholesale, Quantity] ISBN# 9781954118072 in Hardcover by Matti Friedman may be ordered in bulk quantities. Minimum starts at 25 copies. Availability based on publisher status and quantity being ordered.
View AllClose

MSRP:
Now:
As low as
Was:
In addition to the P-38, there are four gifts, one for each of my friends. I want to say good-bye to them properly. I want to give them each something to remember me by. To let them know I really...

MSRP:
Now:
As low as
Was:
The star-studded and sidesplitting follow up to The Andy Cohen Diaries The megapopular host of Watch What Happens: Live and executive producer of The Real Housewives franchise is back, better than...

Who Was Leonardo da Vinci?

MSRP:
Now:
As low as
Was:
Leonardo da Vinci was a gifted painter, talented musician, and dedicated scientist and inventor, designing flying machines, submarines, and even helicopters. Yet he had a hard time finishing things,...

Leonard: My Fifty-Year Friendship with a Remarkable Man

MSRP:
Now:
As low as
Was:
New York Times Bestseller Leonard Nimoy and William Shatner first crossed paths as actors on the set of The Man from U.N.C.L.E. Little did they know that their next roles as Spock and Captain Kirk,...

Get a Grip, Vivy Cohen!

MSRP:
Now:
As low as
Was:
In this perfectly pitched novel-in-letters, autistic eleven-year-old Vivy Cohen won't let anything stop her from playing baseball--not when she has a major-league star as her pen pal. Vivy Cohen...

The Bezos Blueprint: Communication Secrets of the World's Greatest Salesman

MSRP:
Now:
As low as
Was:
Jeff Bezos is a dreamer who turned a bold idea into the world’s most influential company, a brand that likely touches your life every day. As a student of leadership and communication, he learned to...

MSRP:
Now:
As low as
Was:
A high school senior navigates messy boys and messier relationships in this unflichingly honest and much-needed look into the overlap of Asian American identity and teen sexuality. "A fresh...

Radical Confidence: 10 No-Bs Lessons on Becoming the Hero of Your Own Life

MSRP:
Now:
As low as
Was:
Author Lisa Bilyeu grew up in London, where she was always told her dreams of Hollywood were a little too big for a girl. After all, in her traditional Greek culture, who cared about prestigious...

You Should Smile More: How to Dismantle Gender Bias in the Workplace

MSRP:
Now:
As low as
Was:
“In the business world, barriers to inclusion are barriers to success,” states a line from the book’s Introduction. “Diversity breeds better solutions faster if people feel comfortable in their...

The Unseen Photos of Street Gang: How We Got to Sesame Street

MSRP:
Now:
As low as
Was:
The official companion book to the feature-length documentary Street Gang: How We Got to Sesame Street, featuring previously unpublished photographs from the first season of Sesame Street and...

His Greatest Speeches: How Lincoln Moved the Nation

MSRP:
Now:
As low as
Was:
An expert analysis of Abraham Lincoln's three most powerful speeches reveals his rhetorical genius and his thoughts on our national character. Abraham Lincoln, our greatest president, believed...

MSRP:
Now:
As low as
Was:
With the stroke of a pen, the president of the United States can proclaim a national monument. The Antiquities Act of 1906 was enacted to provide an expedited means to protect areas of natural or...

The Pop-Up Pitch: The Two-Hour Creative Sprint to the Most Persuasive Presentation of Your Life

MSRP:
Now:
As low as
Was:
A fast and practical visual storytelling method that puts a powerful new toolkit into the hands of leaders, innovators, salespeople, teachers and anyone else who needs to quickly make an impact on...

Elevating the Human Experience: Three Paths to Love and Worth at Work

MSRP:
Now:
As low as
Was:
Have you ever struggled to feel worthy at work? Do you know or lead people who do? When Amelia Dunlop first heard the phrase "elevating the human experience" in a leadership team meeting with her...