You're Invited: The Art and Science of Cultivating Influence 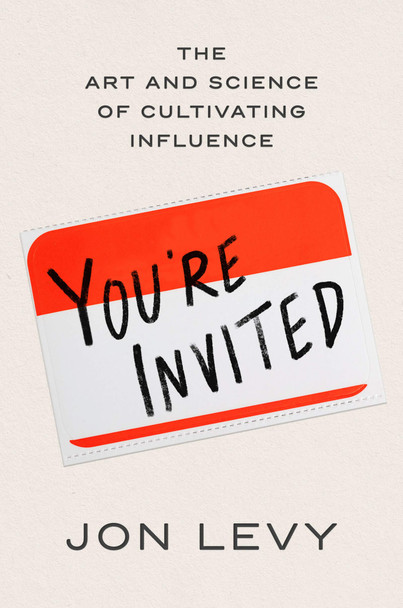 You're Invited: The Art and Science of Cultivating Influence

Regardless of what you want to accomplish, from growing your business, creating a great company culture, championing a social cause, or affecting your habits, you can’t do it alone. The people around you define your success (whatever that means for you) and they have the potential to change the course of your life.

That’s what You’re Invited is about: The most universal strategy for success is creating meaningful connections with those who can impact you, your life, and the things you care about. But how do you make those connections and build trust quickly? What do you do if you’re introverted or hate networking?

Behavioral scientist Jon Levy had no money, reputation or status, but was able to convince groups of Nobel Laureates, Olympians, celebrities, Fortune 500 executives, and even an occasional princess to not only give him advice, but cook him dinner, wash his dishes, sweep his floors, and then thank him for the experience. The goal of his gatherings, much like this book, was not networking, but to build meaningful and lasting relationships.

This private community based around the dinner experience became known as “The Influencers”, named for the member’s success and industry influence. Since its inception more than a decade ago, The Influencers has grown into the largest private group of its kind worldwide, with a thriving community both in person and through digital experiences.

In You’re Invited, Levy guides readers through the art and science of creating deep and meaningful connections with anyone, regardless of their stature or celebrity, and demonstrates how we develop influence, gain trust, and build community so that we can impact our communities and achieve what’s important to us.

The book, You're Invited: The Art and Science of Cultivating Influence [Bulk, Wholesale, Quantity] ISBN# 9780063030978 in Hardcover by Jon Levy may be ordered in bulk quantities. Minimum starts at 25 copies. Availability based on publisher status and quantity being ordered.
View AllClose

The Heart of a Leader: Insights on the Art of Influence

MSRP:
Now:
As low as
Was:
Ken Blanchard is one of America's best-known leadership and business experts. And now he helps you understand and experience the art of influence by revealing the greatest life and leadership lessons...

The Art of Influence: Persuading Others Begins with You

MSRP:
Now:
As low as
Was:
From Chris Widener, the author of the breakout bestsellerThe Angel Inside, comes an inspiring new parable on the power of influence. The Art of Influencewill make you think twice about everything...

Shotgunning: The Art and the Science

MSRP:
Now:
As low as
Was:
The classic shotgun reference from one of the top experts in the field. In this near-legendary handbook, respected firearms expert Bob Brister offers advice, instructions, and solutions to every...

How to Change Minds: The Art of Influence Without Manipulation

MSRP:
Now:
As low as
Was:
Persuade, Don’t Push! Surely you know plenty of people who need to make a change, but despite your most well-intentioned efforts, they resist because people fundamentally fear change. As a salesman,...

Superforecasting: The Art and Science of Prediction

MSRP:
Now:
As low as
Was:
From one of the worldâs most highly regarded social scientists, a transformative book on the habits of mind that lead to the best predictions... The book, Superforecasting: The Art and Science of...

MSRP:
Now:
As low as
Was:
Llama, Llama red pajama waiting, waiting for his mama. Mama isn't coming yet. Baby Llama starts to fret. In this infectious rhyming read-aloud, Baby Llama turns bedtime into an all-out...

MSRP:
Now:
As low as
Was:
With more than 12 million books sold, bestselling author Dan Gutman's My Weird School series really gets kids reading! How did four strange teachers get into this little box? Meet a teacher who...

Loonshots: How to Nurture the Crazy Ideas That Win Wars, Cure Diseases, and Transform Industries [Hardcover]

MSRP:
Now:
As low as
Was:
**A 2019 OWL AWARD SHORTLIST WINNER IN THE BIG IDEA CATEGORY**Longlisted for the 2019 Financial Times and McKinsey Business Book of the Year Award. Washington Post's "10 Leadership Books to Watch for...

No Barriers: A Blind Man's Journey to Kayak the Grand Canyon

MSRP:
Now:
As low as
Was:
**A 2017 OWL AWARD SHORTLIST WINNER**Adventurer Erik Weihenmayer is the first and only blind person to summit Mt. Everest. In this memoir, Weihenmayer chronicles his journey since descending the...

The Outward Mindset: Seeing Beyond Ourselves

MSRP:
Now:
As low as
Was:
Unknowingly, too many of us operate from an inward mindset—a narrow-minded focus on self-centered goals and objectives. When faced with personal ineffectiveness or lagging organizational performance,...

MSRP:
Now:
As low as
Was:
From beloved and bestselling author Lauren Myracle comes the first book in an enchanting trilogy about three sisters, the magic of traditions, and the extraordinary power of hope. This heartwarming,...