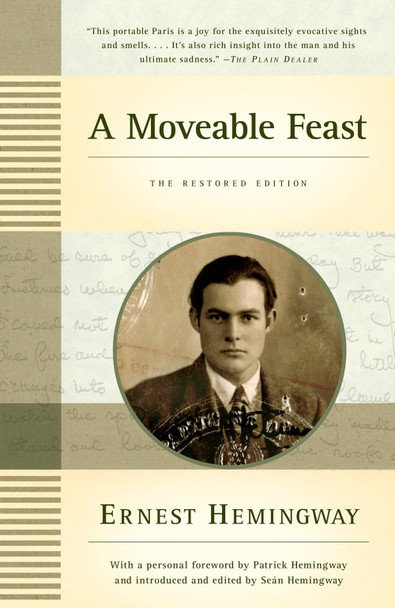 Ernest Hemingway’s classic memoir of Paris in the 1920s, now available in a restored edition, includes the original manuscript along with insightful recollections and unfinished sketches. Published posthumously in 1964, A Moveable Feast remains one of Ernest Hemingway’s most enduring works. Since Hemingway’s personal papers were released in 1979, scholars have examined the changes made to the text before publication. Now, this special restored edition presents the original manuscript as the author prepared it to be published. Featuring a personal Foreword by Patrick Hemingway, Ernest’s sole surviving son, and an Introduction by grandson of the author, Seán Hemingway, editor of this edition, the book also includes a number of unfinished, never-before-published Paris sketches revealing experiences that Hemingway had with his son, Jack, and his first wife Hadley. Also included are irreverent portraits of literary luminaries, such as F. Scott Fitzgerald and Ford Maddox Ford, and insightful recollections of Hemingway’s own early experiments with his craft. Widely celebrated and debated by critics and readers everywhere, the restored edition of A Moveable Feast brilliantly evokes the exuberant mood of Paris after World War I and the unbridled creativity and unquenchable enthusiasm that Hemingway himself epitomized.

The book, A Moveable Feast [Bulk, Wholesale, Quantity] ISBN# 9781439182710 in Paperback by Hemingway, Ernest may be ordered in bulk quantities. Minimum starts at 25 copies. Availability based on publisher status and quantity being ordered.
View AllClose

MSRP:
Now:
As low as
Was:
A counting book that features an African-American family shopping for food, preparing dinner, and sitting down to eat. Lively read-aloud text paired with bright collage illustrations. The book, Feast...

MSRP:
Now:
As low as
Was:
Ernest Hemingway’s classic memoir of Paris in the 1920s, now available in a restored edition, includes the original manuscript along with insightful recollections and unfinished sketches. Published...

MSRP:
Now:
As low as
Was:
A counting book that features an African-American family shopping for food, preparing dinner, and sitting down to eat. Lively read-aloud textThe book, Feast for 10 ISBN 9780395720813 in Picture Book...

MSRP:
Now:
As low as
Was:
A counting book that features an African-American family shopping for food, preparing dinner, and sitting down to eat. A lively read-aloud text, now with an accompanying CDThe book, Feast for 10 ISBN...

MSRP:
Now:
As low as
Was:
If Fancy Nancy got angry. Really, really angry. Millie is quiet. Millie is sweet. Millie is mild. But the kids at school don't listen to her. And she never gets a piece of birthday cake with a...

MSRP:
Now:
As low as
Was:
While out searching for food, fruit bat Stellaluna and her mother are attacked by a vicious owl. Stellaluna is separated from Mother Bat and taken in by a family of birds where she must put aside her...

Effortless: Make It Easy to Do What Matters

MSRP:
Now:
As low as
Was:
From the New York Times bestselling author of Essentialism comes a book devoted to a simple principle: getting great results doesn't have to be so hard. Do you ever feel like • things are so much...

Thank You: (A Book for Teachers)

MSRP:
Now:
As low as
Was:
The perfect last-minute gift for your favorite teacher. As artist and writer Sandy Gingras so aptly points out in the introduction to her book Thank You, a life lived well is perhaps the highest form...

MSRP:
Now:
As low as
Was:
The perfect book for all student journalists, this young readers adaptation of the New York Times bestselling She Said by Pulitzer Prize winning reporters' Jodi Kantor and Megan Twohey will inspire...

I Don't Want to Read This Book

MSRP:
Now:
As low as
Was:
From actor Max Greenfield (fan-favorite “Schmidt” from television’s New Girl) comes a hilarious picture book for every child who thinks they don't like to read books (and all the kids—and...

The Richest Man in Babylon: The Complete Original Edition Plus Bonus Material (A GPS Guide to Life)

MSRP:
Now:
As low as
Was:
The Most Important Book on Money You'll Ever Read Also Includes Acres of Diamond The Richest Man in Babylon is a transformative book that has changed the way millions of people think about money...