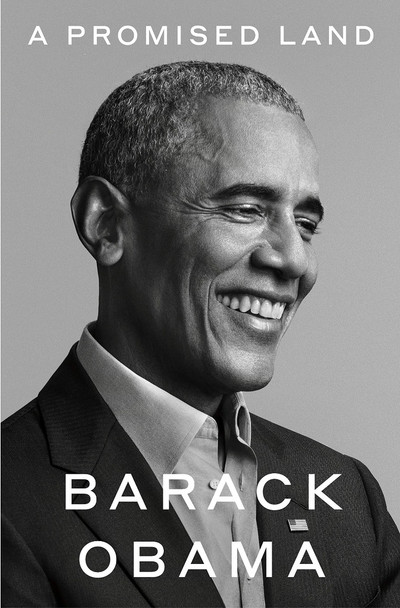 MSRP:
Now: List Price $45.00
Was:
— You save
Hardcover
This product qualifies for FREE US Ground Shipping on orders over $100.

A riveting, deeply personal account of history in the making—from the president who inspired us to believe in the power of democracy

In the stirring, highly anticipated first volume of his presidential memoirs, Barack Obama tells the story of his improbable odyssey from young man searching for his identity to leader of the free world, describing in strikingly personal detail both his political education and the landmark moments of the first term of his historic presidency—a time of dramatic transformation and turmoil.

Obama takes readers on a compelling journey from his earliest political aspirations to the pivotal Iowa caucus victory that demonstrated the power of grassroots activism to the watershed night of November 4, 2008, when he was elected 44th president of the United States, becoming the first African American to hold the nation’s highest office.

Reflecting on the presidency, he offers a unique and thoughtful exploration of both the awesome reach and the limits of presidential power, as well as singular insights into the dynamics of U.S. partisan politics and international diplomacy. Obama brings readers inside the Oval Office and the White House Situation Room, and to Moscow, Cairo, Beijing, and points beyond. We are privy to his thoughts as he assembles his cabinet, wrestles with a global financial crisis, takes the measure of Vladimir Putin, overcomes seemingly insurmountable odds to secure passage of the Affordable Care Act, clashes with generals about U.S. strategy in Afghanistan, tackles Wall Street reform, responds to the devastating Deepwater Horizon blowout, and authorizes Operation Neptune’s Spear, which leads to the death of Osama bin Laden.

A Promised Land is extraordinarily intimate and introspective—the story of one man’s bet with history, the faith of a community organizer tested on the world stage. Obama is candid about the balancing act of running for office as a Black American, bearing the expectations of a generation buoyed by messages of “hope and change,” and meeting the moral challenges of high-stakes decision-making. He is frank about the forces that opposed him at home and abroad, open about how living in the White House affected his wife and daughters, and unafraid to reveal self-doubt and disappointment. Yet he never wavers from his belief that inside the great, ongoing American experiment, progress is always possible.

This beautifully written and powerful book captures Barack Obama’s conviction that democracy is not a gift from on high but something founded on empathy and common understanding and built together, day by day.

The book, A Promised Land [Bulk, Wholesale, Quantity] ISBN# 9781524763169 in Hardcover by Barack Obama may be ordered in bulk quantities. Minimum starts at 25 copies. Availability based on publisher status and quantity being ordered.

MSRP:
Now:
As low as
Was:
A stunning repackage of a companion to Mildred D. Taylor's Roll of Thunder, Hear My Cry, with cover art by two-time Caldecott Honor Award winner Kadir Nelson! The son of a prosperous landowner and a...

This Land Is Our Land: An Immigrant's Manifesto

MSRP:
Now:
As low as
Was:
A 2019 NPR Staff Pick A timely argument for why the United States and the West would benefit from accepting more immigrants There are few subjects in American life that prompt more discussion and...

MSRP:
Now:
As low as
Was:
With historical mysteries, religious intrigue, and political danger, Promised Land asks one momentous question: What if your calling puts you—and your family—in the crosshairs? Despite their Israeli...

One in a Million: Journey to Your Promised Land [Paperback]

MSRP:
Now:
As low as
Was:
The Egyptians in Exodus 1 were intent on enslaving the Israelites, wearing them down so that God’s chosen people would become disillusioned and not live up to their destiny. Of the original two...

Where Tomorrows Aren't Promised: A Memoir of Survival and Hope

MSRP:
Now:
As low as
Was:
From iconic NBA All-Star Carmelo Anthony comes a raw and inspirational memoir about growing up in the housing projects of Red Hook and Baltimore—a brutal world Where Tomorrows Aren’t Promised. For...

MSRP:
Now:
As low as
Was:
From the bestselling creator of Not Quite Narwhal comes a delightfully spooky story about an old house who wants to be a home…even if her new family isn’t what she expected. House has a problem...

MSRP:
Now:
As low as
Was:
Most people would agree that thoughtful behavior and common decency are in short supply, or simply forgotten in hurried lives of emails, cellphones, and multi-tasking. In Choosing Civility, P. M...

The 48 Laws of Power [Paperback]

MSRP:
Now:
As low as
Was:
The 48 Laws of Power by Robert Greene is a trusted exploration into 3,000 years of powerful people in history, all boiled down into 48 laws to live by in business and life. A New York Times...

Mr. Brown Can Moo! Can You?: Dr. Seuss's Book of Wonderful Noises

MSRP:
Now:
As low as
Was:
Kids will love this noise-filled Bright and Early Book classic from the one and only Dr. Seuss! Mr. Brown is a sound-making wonder! He can hoo hoo like an owl and buzz buzz like a bee. It is so much...

The City of Ember

MSRP:
Now:
As low as
Was:
A modern-day classic. This highly acclaimed adventure series about two friends desperate to save their doomed city has captivated kids and teachers alike for almost fifteen years and has sold over 3...

MSRP:
Now:
As low as
Was:
From the award-winning author of Monster, this collection of powerful and poignant stories about 145th Street—an unforgettable block in the heart of Harlem—celebrates African-American life in all of...

Notes from an Apocalypse: A Personal Journey to the End of the World and Back

MSRP:
Now:
As low as
Was:
By the author of the award-winning To Be a Machine, an absorbing, deeply felt book about our anxious present tense--and coming to grips with the futureWe're alive in a time of worst-case scenarios:...

A Girl in Three Parts

MSRP:
Now:
As low as
Was:
A story of sisterhood, solidarity, and finding your place in a changing world, A GIRL IN THREE PARTS is part Eighth Grade, part Divine Secrets of the Ya-Ya Sisterhood, and entirely original. Allegra...