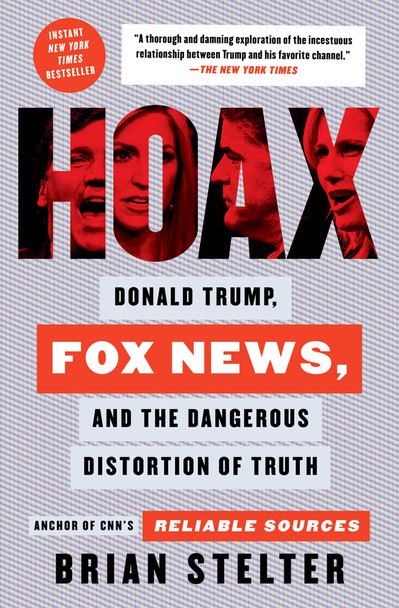 The instant New York Times bestseller that reveals the collusion between Fox News and Donald Trump—with explosive new reporting covering the election and the January 6 riot.

As the nation recovers from the Trump presidency, many questions remain: Why was the COVID-19 pandemic so grossly mishandled? How did we get so politically polarized? What caused white nationalist groups to come out of the shadows, and are they here to stay?

The answers lie the twisted story of the relationship between Donald Trump and Fox News. Through firsthand accounts from over 250 current and former Fox insiders, CNN anchor and chief media correspondent Brian Stelter unlocks the inner workings of Rupert Murdoch’s multibillion-dollar media empire. The confessions are shocking: “We don’t really believe all this stuff,” a producer says. “We just tell other people to believe it.”

Stelter completes the story of the Trump years and looks toward the future of the network that made him. Hoax is a book for anyone who reads the news and wonders how we got here, and what happens next.

The book, Hoax: Donald Trump, Fox News, and the Dangerous Distortion of Truth [Bulk, Wholesale, Quantity] ISBN# 9781982142452 in Paperback by Brian Stelter may be ordered in bulk quantities. Minimum starts at 25 copies. Availability based on publisher status and quantity being ordered.

MSRP:
Now:
As low as
Was:
INSTANT NEW YORK TIMES BESTSELLER “A thorough and damning exploration of the incestuous relationship between Trump and his favorite channel.” —The New York Times “A Rosetta Stone for stuff about...

MSRP:
Now:
As low as
Was:
From celebrated public intellectual and New York Times bestselling author, Stanley Fish, comes an urgent and sharply observed look at one of the most hotly debated issues of our time: freedom of...

The Making of Donald Trump

MSRP:
Now:
As low as
Was:
THE NEW YORK TIMES BESTSELLER The culmination of nearly 30 years of reporting on Donald Trump, Pulitzer Prize-winning investigative reporter, David Cay Johnston, takes a revealingly close look at the...

MSRP:
Now:
As low as
Was:
WITH A NEW INTRODUCTION AND AFTERWORD FOR THE PAPERBACK EDITION Fox News legal analyst Gregg Jarrett reveals the real story behind Hillary Clinton’s deep state collaborators in government and...

MSRP:
Now:
As low as
Was:
A stirring, intimate reflection on the nature of race and American nationhood that has inspired generations of writers and thinkers, first published in 1963, the same year as the March on...

The Best We Could Do: An Illustrated Memoir

Bias Interrupted: Creating Inclusion for Real and for Good

MSRP:
Now:
As low as
Was:
A cutting edge, relentless, objective approach to inclusion. Companies spend billions of dollars annually on diversity efforts, with remarkably few results. Too often diversity efforts rest on the...

MSRP:
Now:
As low as
Was:
A BookPal Staff Pick for June 2021 Building on the groundwork laid in the New York Times bestseller White Fragility, Robin DiAngelo explores how a culture of niceness inadvertently promotes racism...

MSRP:
Now:
As low as
Was:
**2019 OWL AWARD POLITICS & CURRENT EVENTS CATEGORY WINNER**On March 16, 2018, just twenty-six hours before his scheduled retirement from the organization he had served with distinction for more...