Jay-Z: Made in America [Hardcover] 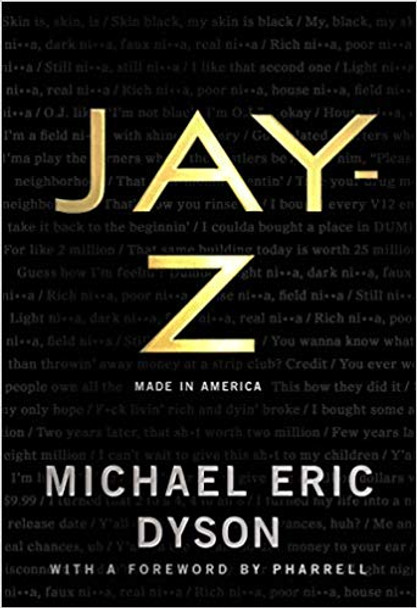 Jay-Z: Made in America [Hardcover]

"Dyson's incisive analysis of JAY-Z's brilliance not only offers a brief history of hip-hop's critical place in American culture but also hints at how we can best move forward." ―Questlove

JAY-Z: Made in America is the fruit of Michael Eric Dyson’s decade of teaching the work of one of the greatest poets this nation has produced, as gifted a wordsmith as Walt Whitman, Robert Frost and Rita Dove. But as a rapper, he’s sometimes not given the credit he deserves for just how great an artist he’s been for so long.

This book wrestles with the biggest themes of JAY-Z's career, including hustling, and it recognizes the way that he’s always weaved politics into his music, making important statements about race, criminal justice, black wealth and social injustice. As he enters his fifties, and to mark his thirty years as a recording artist, this is the perfect time to take a look at JAY-Z’s career and his role in making this nation what it is today. In many ways, this is JAY-Z’s America as much as it’s Pelosi’s America, or Trump’s America, or Martin Luther King’s America. JAY-Z has given this country a language to think with and words to live by.

The book, Jay-Z: Made in America [Bulk, Wholesale, Quantity] ISBN# 9781250230966 in Hardcover by Michael Eric Dyson may be ordered in bulk quantities. Minimum starts at 25 copies. Availability based on publisher status and quantity being ordered.
View AllClose

Compost Stew: An A to Z Recipe for the Earth [Hardcover]

MSRP:
Now:
As low as
Was:
Apple cores Bananas, bruised Coffee grounds with filters, used Just add to the pot and let it all rot into Compost Stew! From eggshells to wiggly worms, this delightful recipe in bouncy verse...

Who Was First? : Discovering the Americas [Hardcover]

MSRP:
Now:
As low as
Was:
Award-winning nonfiction author Russell Freedman examines the ongoing debate over who really discovered America.... The book, Who Was First? : Discovering the Americas [Bulk, Wholesale, Quantity]...

America Border Culture Dreamer: The Young Immigrant Experience from A to Z

MSRP:
Now:
As low as
Was:
First- and second-generation immigrants to the US from all around the world collaborate with renowned photographer Wendy Ewald to create a stunning, surprising catalog of their experiences from A to...

MSRP:
Now:
As low as
Was:
America: A Patriotic Primeris a succinct history of the United States, an ABC of the principles on which this country was founded, and a book for children and families to pore over, discuss, and...

Sam Walton: Made in America [Paperback]

MSRP:
Now:
As low as
Was:
Meet a genuine American folk hero cut from the homespun cloth of America's heartland: Sam Walton, who parlayed a single dime store in a hardscrabble cotton town into Wal-Mart, the largest retailer in...

MSRP:
Now:
As low as
Was:
This award winning series has been specifically designed for babies. A great introduction to books through well-known nursery rhymes and interactive text. Singing songs and rhymes is the perfect way...