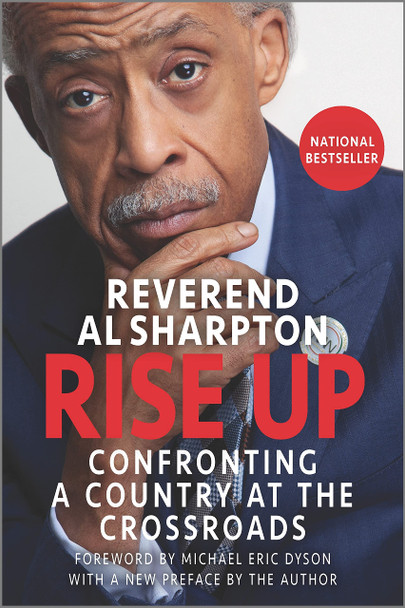 Beginning with a foreword by Michael Eric Dyson, Rise Up is a rousing call to action for our nation, drawing on lessons learned from Reverend Al Sharpton’s unique experience as a politician, television and radio host, and civil rights leader.

Rise Up offers timeless lessons for anyone who’s stood at the crossroads of their personal or political life, weighing their choices of how to proceed.

When the young Alfred Charles Sharpton told his mother he wanted to be a preacher, little did he know that his journey would also lead him to prominence as a politician, founder of the National Action Network, civil rights activist, and television and radio talk show host. His enduring ability and willingness to take on the political power structure makes him the preeminent voice for the modern era, a time unprecedented in its challenges.

In Rise Up, Reverend Sharpton revisits the highlights of the Obama administration, the 2016 election and Trump’s subsequent hold on the GOP, and draws on his decades-long experience with other key players in politics and activism, including Shirley Chisholm, Hillary Clinton, Dr. Martin Luther King Jr. and more.

The time has come to take a hard look at our collective failures and shortcomings and reclaim our core values in order to build a clear and just path forward for America. Our nation today stands at a crossroads—and change can’t wait.

“Full of history, honesty, and valuable suggestions, Rise Up should be a staple in every home, school and library as an essential primer on civil and political rights in America.”—Martin Luther King, III

“If you want to learn how to use your voice to change a nation, you should study closely this man—and this book.” —Van Jones

“My Bed-Stuy (do or die) brother has been at the forefront of our battles again and again. From way back in da way back to this present revolution the world is in now, Rev. has been about Black Lives Matter from the jump, also at a time when it was not the most popular or hip thing to be about. I look forward, standing next to him, to see, to witness this new energy, this new day that is about to be in these United States of America.”—Spike Lee

The book, Rise Up: Confronting a Country at the Crossroads [Bulk, Wholesale, Quantity] ISBN# 9781335522542 in Paperback by Al Sharpton may be ordered in bulk quantities. Minimum starts at 25 copies. Availability based on publisher status and quantity being ordered.
View AllClose

Growing up in Coal Country

MSRP:
Now:
As low as
Was:
Inspired by her in-laws' recollections of working in coal country, Susan Campbell Bartoletti has gathered the voices of men, women, and children who immigrated to and worked in northeastern...

MSRP:
Now:
As low as
Was:
In RISE UP: Confronting a Country at the Crossroads, Rev. Al Sharpton revisits the highlights of the Obama administration, the 2016 election, and Trump’s subsequent hold on the GOP, and draws on his...

MSRP:
Now:
As low as
Was:
Jaime and Ángela discover what it means to be living as undocumented immigrants in the United States in this timely sequel to the Pura Belpré Honor Book The Only Road. After crossing Mexico into the...

Be the Change: Be Kind: Rise Up and Make a Difference to the World

MSRP:
Now:
As low as
Was:
A fun and empowering interactive mental health guide for 8-12-year-olds on the power of kindness by award-winning author Marcus Sedgwick You can choose to make the world a better place. The power...

The Impossible Will Take a Little While: Perseverance and Hope in Troubled Times

MSRP:
Now:
As low as
Was:
More relevant than ever, this seminal collection of essays encourages us to believe in the power of ordinary citizens to change the world In today's turbulent world it's hard not to feel like...

Stronger: Courage, Hope, and Humor in My Life with John McCain

MSRP:
Now:
As low as
Was:
The widow of Senator John McCain opens up about her beloved husband, their thirty-eight-year marriage, and the trials and triumphs of a singular American life. My husband, John McCain, never...

The Miracle of Mindfulness, Gift Edition: An Introduction to the Practice of Meditation

MSRP:
Now:
As low as
Was:
A new gift edition of the classic guide to meditation and mindfulness, featuring archival photography and beautiful calligraphy by Thich Nhat Hanh The Miracle of Mindfulness is a classic guide to...