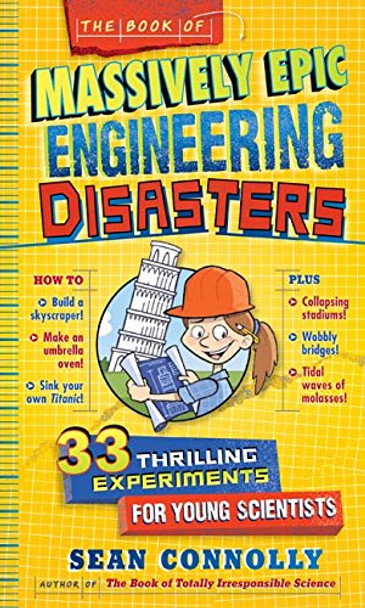 MSRP:
Now: List Price $14.95
Was:
— You save
Hardcover
This product qualifies for FREE US Ground Shipping on orders over $100.

It’s hands-on science with a capital “E”—for engineering. Beginning with the toppling of the Colossus of Rhodes, one of the seven wonders of the ancient world, to the destructive, laserlike sunbeams bouncing off London’s infamous “Fryscraper” in 2013, here is an illustrated tour of the greatest engineering disasters in history, from the bestselling author of The Book of Totally Irresponsible Science. Each engineering disaster includes a simple, exciting experiment or two using everyday household items to explain the underlying science and put learning into action. Understand the Titanic’s demise by sinking an ice-cube-tray ocean liner in the bathtub. Stomp on a tube of toothpaste to demonstrate what happens to non-Newtonian fluids under pressure—and how a ruptured tank sent a tsunami of molasses through the streets of Boston in 1919. From why the Leaning Tower of Pisa leans to the fatal design flaw in the Sherman tank, here’s a book of science at its most riveting.

The book, The Book of Massively Epic Engineering Disasters: 33 Thrilling Experiments Based on History's Greatest Blunders [Bulk, Wholesale, Quantity] ISBN# 9780761183945 in Hardcover by Sean Connolly may be ordered in bulk quantities. Minimum starts at 25 copies. Availability based on publisher status and quantity being ordered.
View AllClose

MSRP:
Now:
As low as
Was:
This legendary, still-relevant reference text on aircraft stress analysis discusses basic structural theory and the application of the elementary principles of mechanics to the analysis of aircraft...

MSRP:
Now:
As low as
Was:
REAL KIDS. REAL DISASTERS. From the author of the New York Times bestselling I Survived series come five harrowing true stories of survival, featuring real kids in the midst of epic disasters. From a...

Midnight in Chernobyl: The Untold Story of the World's Greatest Nuclear Disaster [Paperback]

MSRP:
Now:
As low as
Was:
Did Jesus Really Exist? The search for the historical Jesus continues to be headline news. Any speculative theory seems to get instant attention as the debate rages about His real identity and the...

Kate the Chemist: The Big Book of Experiments

MSRP:
Now:
As low as
Was:
Packed with 25 incredible science experiments kids can do at home, Kate the Chemist introduces young scientists to the fascinating world of STEM! Learn how to make slime, fake tattoos, edible snot,...

MSRP:
Now:
As low as
Was:
An illustrated, illuminating insight into the world of illusion from the world’s greatest and most successful magician, capturing its audacious and inventive practitioners, and showcasing the art...

The Night Before Father's Day

MSRP:
Now:
As low as
Was:
It's Father's Day! Celebrate dads everywhere with bike rides, car washes, and more in this installment of Natasha Wing's best-selling series. It's the night before Father's Day, and Mom and the...