We Crossed a Bridge and It Trembled: Voices from Syria 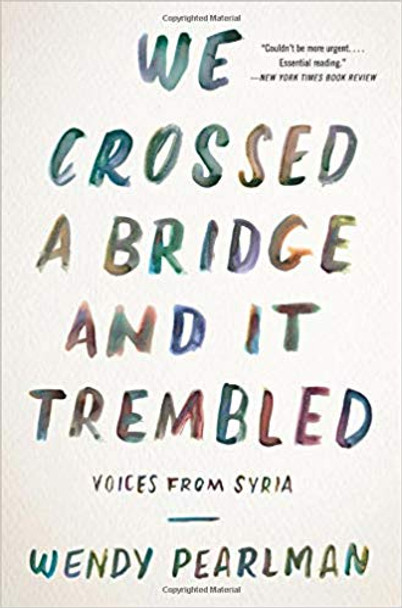 We Crossed a Bridge and It Trembled: Voices from Syria

Reminiscent of the work of Nobel Prize winner Svetlana Alexievich, an astonishing collection of intimate wartime testimonies and poetic fragments from a cross-section of Syrians whose lives have been transformed by revolution, war, and flight. Against the backdrop of the wave of demonstrations known as the Arab Spring, in 2011 hundreds of thousands of Syrians took to the streets demanding freedom, democracy and human rights. The government’s ferocious response, and the refusal of the demonstrators to back down, sparked a brutal civil war that over the past five years has escalated into the worst humanitarian catastrophe of our times. Yet despite all the reporting, the video, and the wrenching photography, the stories of ordinary Syrians remain unheard, while the stories told about them have been distorted by broad brush dread and political expediency. This fierce and poignant collection changes that. Based on interviews with hundreds of displaced Syrians conducted over four years across the Middle East and Europe, We Crossed a Bridge and It Trembled is a breathtaking mosaic of first-hand testimonials from the frontlines. Some of the testimonies are several pages long, eloquent narratives that could stand alone as short stories; others are only a few sentences, poetic and aphoristic. Together, they cohere into an unforgettable chronicle that is not only a testament to the power of storytelling but to the strength of those who face darkness with hope, courage, and moral conviction.

The book, We Crossed a Bridge and It Trembled: Voices from Syria [Bulk, Wholesale, Quantity] ISBN# 9780062654441 in Paperback by Wendy Pearlman may be ordered in bulk quantities. Minimum starts at 25 copies. Availability based on publisher status and quantity being ordered.
View AllClose

Titanic: Voices From The Disaster

MSRP:
Now:
As low as
Was:
On April 15, 1912, the magnificent ocean liner the RMS Titanic struck an iceberg and sank beneath the icy North Atlantic seas. Hopkinson weaves together archival photographs and the voices of real...

Voices from the Rust Belt

MSRP:
Now:
As low as
Was:
“Timely . . . [the collection] paints intimate portraits of neglected places that are often used as political talking points. A good companion piece to J. D. Vance’s Hillbilly Elegy.”―Booklist The...

A View from the Bridge

MSRP:
Now:
As low as
Was:
Set on the gritty Brooklyn waterfront, A View from the Bridge follows the cataclysmic downfall of Eddie Carbone, who spends his days as a hardworking longshoreman and his nights at home with his...

MSRP:
Now:
As low as
Was:
A graphic story of intense current events. From the pen of former Daily Star (Lebanon) reporter Samya Kullab comes a breathtaking and hard-hitting story of one family's struggle to survive in the...

MSRP:
Now:
As low as
Was:
"Sarah Glidden’s remarkable Rolling Blackouts adds a new twist to the [graphic journalism] form. Glidden accompanies a team of journalists through Syria and Iraq and her muted watercolours record not...

MSRP:
Now:
As low as
Was:
There is good news in the "war on cancer". Optimal nutrition coupled with appropriate medical treatment can dramatically improve the quality and quantity of life and chances for a complete remission...