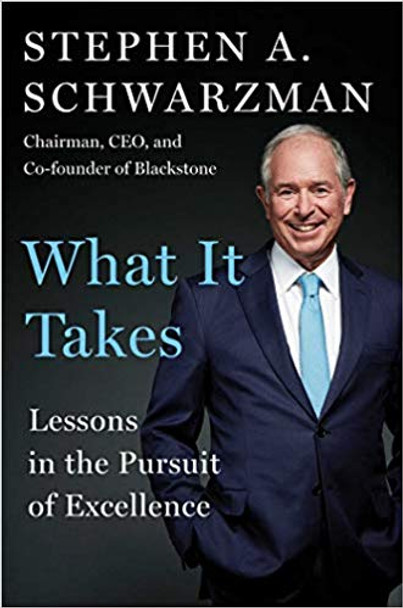 From Blackstone chairman, CEO, and co-founder Stephen A. Schwarzman, a long-awaited book that uses impactful episodes from Schwarzman's life to show readers how to build, transform, and lead thriving organizations. Whether you are a student, entrepreneur, philanthropist, executive, or simply someone looking for ways to maximize your potential, the same lessons apply.

People know who Stephen Schwarzman is—at least they think they do. He’s the man who took $400,000 and co-founded Blackstone, the investment firm that manages over $500 billion (as of January 2019). He’s the CEO whose views are sought by heads of state. He’s the billionaire philanthropist who founded Schwarzman Scholars, this century’s version of the Rhodes Scholarship, in China. But behind these achievements is a man who has spent his life learning and reflecting on what it takes to achieve excellence, make an impact, and live a life of consequence.

Folding handkerchiefs in his father’s linen shop, Schwarzman dreamed of a larger life, filled with purpose and adventure. His grades and athleticism got him into Yale. After starting his career in finance with a short stint at a financial firm called DLJ, Schwarzman began working at Lehman Brothers where he ascended to run the mergers and acquisitions practice. He eventually partnered with his mentor and friend Pete Peterson to found Blackstone, vowing to create a new and different kind of financial institution.

Building Blackstone into the leading global financial institution it is today didn’t come easy. Schwarzman focused intensely on culture, hiring great talent, and establishing processes that allow the firm to systematically analyze and evaluate risk. Schwarzman’s simple mantra “don’t lose money” has helped Blackstone become a leading private equity and real estate investor, and manager of alternative assets for institutional investors globally. Both he and the firm are known for the rigor of their investment process, their innovative approach to deal making, the diversification of their business lines, and a conviction to be the best at everything they do.

Schwarzman is also an active philanthropist, having given away more than a billion dollars. In philanthropy, as in business, he is drawn to situations where his capital and energy can be applied to drive transformative solutions and change paradigms, notably in education. He uses the skills learned over a lifetime in finance to design, establish, and support impactful and innovative organizations and initiatives. His gifts have ranged from creating a new College of Computing at MIT for the study of artificial intelligence, to establishing a first-of-its-kind student and performing arts center at Yale, to enabling the renovation of the iconic New York Public Library, to founding the Schwarzman Scholars fellowship program at Tsinghua University in Beijing—the single largest philanthropic effort in China’s history from international donors.

Schwarzman’s story is an empowering, entertaining, and informative guide for anyone striving for greater personal impact. From deal making to investing, leadership to entrepreneurship, philanthropy to diplomacy, Schwarzman has lessons for how to think about ambition and scale, risk and opportunities, and how to achieve success through the relentless pursuit of excellence. Schwarzman not only offers readers a thoughtful reflection on all his own experiences, but in doing so provides a practical blueprint for success.

The book, What It Takes: Lessons in the Pursuit of Excellence [Bulk, Wholesale, Quantity] ISBN# 9781501158148 in Hardcover by Stephen A. Schwarzman may be ordered in bulk quantities. Minimum starts at 25 copies. Availability based on publisher status and quantity being ordered.
View AllClose

The New Brooklyn: What It Takes to Bring a City Back

MSRP:
Now:
As low as
Was:
Only a few decades ago, the Brooklyn stereotype well known to Americans was typified by television programs such as “The Honeymooners” and “Welcome Back, Kotter”—comedies about working-class...

Take Command: Lessons in Leadership: How to Be a First Responder in Business

MSRP:
Now:
As low as
Was:
What do elite members of the military, first responders in the disaster zone, and high-performing leaders in fast-paced, high-pressure, modern day organizations have in common? The ability to have...

Dream Big: Michael Jordan and the Pursuit of Excellence

MSRP:
Now:
As low as
Was:
Olympic dreams come true in this inspiring picture book from Michael Jordan’s mother, author of the New York Times bestselling Salt in His Shoes. Long before he became a professional All-Star...

You Have What It Takes: What Every Father Needs to Know

MSRP:
Now:
As low as
Was:
Wild at Heart helped men to rediscover their masculine hearts-to be the men God designed them to be. Now this small book goes a step further, encouraging fathers to pass this insight on to their...

In Search of Excellence: Lessons from America's Best-Run Companies

MSRP:
Now:
As low as
Was:
The "Greatest Business Book of All Time" (Bloomsbury UK), In Search of Excellence has long been a must-have for the boardroom, business school, and bedside table. Based on a study of forty-three of...

MSRP:
Now:
As low as
Was:
Act like an owner--even if you work on the ground floor--and huge opportunities will present themselves to you. The cult favorite snack Flamin' Hot Cheetos would never have existed save for the...

MSRP:
Now:
As low as
Was:
This book chronicles the unforgettable account of one of the most severe child abuse cases in California history. It is the story of Dave Pelzer, who was brutally beaten and starved by his...

MSRP:
Now:
As low as
Was:
**A 2019 OWL AWARD LONGLIST WINNER IN THE LEADERSHIP CATEGORY**A clear-eyed account of learning how to lead in a chaotic world, by General Jim Mattis—the former Secretary of Defense and one of...